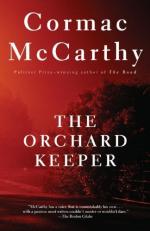 This detailed literature summary also contains Topics for Discussion and a Free Quiz on The Orchard Keeper by Cormac McCarthy.

Marion Sylder, a whiskey bootlegger, is attacked by the lawless Kenneth Rattner but winds up killing him in self-defense. Years later, Sylder becomes friends with Kenneth Rattner's son, John Wesley, but neither knows their tragic connection. Elsewhere in Red Branch, an old orchard keeper named Arthur Ownby gets in trouble with the law for resisting the government's intrusion on his life, symbolized by a tank they keep on his property. When all is done, Ownby is in an asylum, Sylder is in jail, and John Wesley is the sole representative of the way Red Branch used to be.

The story opens with Kenneth Rattner unsuccessfully trying to hitch-hike on a stretch of highway in Georgia, not far from Atlanta. He is trying to get to Knoxville. He meets up with the desperate Marion Sylder, who has just been fired from his job, somewhere in between and tries to make him the next victim of his larcenous ways. When Sylder's tire goes flat, Rattner strikes him with a tire iron and injures his shoulder, but it is not enough to take Sylder out. The two men wrestle and Sylder ultimately gets the upper hand. He denies Rattner's pleas for mercy and strangles him to death. He dumps the body on Arthur Ownby's land, an area he knows well since it is frequently where whiskey is dropped of for his bootlegging runs. John Wesley Rattner, Kenneth's only child, and his mother, Mildred, barely survive after Kenneth dies. They live under the illusion that their father was a noble, hard-working, honest man who was probably the victim of the precise kind of man that he was in reality. John Wesley, a frequent adventurer through the woods, even late at night, makes a kind of pact with a voice he hears late at night to exact revenge upon whomever took his father's life. Meanwhile, Arthur Ownby discovers the corpse on his property and, instead of informing the police, decides to turn the pit in which the body was dumped into a kind of crypt. He covers it with trees to protect it from the elements and, probably, to symbolically separate it from himself.

While on a whiskey run one night, Sylder is picking up some bottles stashed on Ownby's property when he sees the old man firing a shotgun into a government tank that is kept on his property. The defacement is methodical, almost ritualistic. Sylder hurries up, grabs the rest of his whiskey, and leaves, unsure what he ought to expect from the old man next. Ownby, however, has no intention of harming him and instead just watches his black car peel away onto the highway. Not long after he leaves, Sylder winds up careening off into the woods and landing in a stream. It so happens that John Wesley is checking some animal traps he laid there the night before. John Wesley helps him out; Sylder is injured, but not seriously, and the two head off to June Tipton's house, Sylder's friend. He takes them to Sylder's house where they get cleaned up—it is very cold out and both are soaking wet—before Sylder drops John Wesley back at his house. As a sign of gratitude, he gives John Wesley one of his dogs. The two develop a relationship and Sylder even teaches Wesley how to hunt. Neither, of course, know that Sylder killed John Wesley's father.

The Red Branch police are aroused both by the car crash—the car's whiskey cargo was still partially intact—and the defacement of the tank. Jefferson Gifford, one of the policemen, starts interrogating people around Red Branch for more information. He suspects John Wesley's involvement on account of his shoes; when John Wesley got cleaned up at Sylder's house, he put on a pair of slippers, hardly ideal footwear for cold weather. He threatens to charge him with trapping without a license and aiding a criminal, but John Wesley refuses to say anything against Sylder. The cops then show up at Arthur Ownby's house to ask him about the defaced tank. When they arrive, he is standing in his doorway, waiting for them with shotgun in hand. They call for backup and Ownby escapes after injuring several cops with shotgun blasts. They track him down only much later, far from his home. Sylder, too, gets caught when his car stalls on a bridge while transporting whiskey. They assume Ownby is insane or at least senile and send him to a mental hospital. Sylder gets sentenced to three years for illegally transporting whiskey. John Wesley leaves Red Branch for a few years and returns to find almost no one there, the last representative of the way things were.