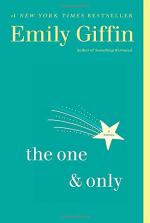 The One & Only Summary & Study Guide

The One & Only Summary & Study Guide Description

The One & Only Summary & Study Guide includes comprehensive information and analysis to help you understand the book. This study guide contains the following sections:

This detailed literature summary also contains Quotes and a Free Quiz on The One & Only by Emily Giffin.

The One and Only is the story of a 33-year-old woman named Shea Rigsby and the ups and downs of her personal and professional relationships over the course of a year. Shea grew up in a small Texas town called Walker where she was befriended by the Carr family. Coach Clive Carr is the head coach of the local college football team and Shea idolized him as a girl growing up. Mrs. Carr, who has died from cancer as the story opens, was a typical Southern wife and mother who faithfully supported her husband and children, Lawton and Lucy, who remains Shea's best friend. Shea's own parents are divorced and Shea has never had a close relationship with her father who now lives in New York with his wife, Astrid, and their daughter, Bronwyn.

Shea grew up in Walker where she became a football fanatic, went to college at Walker and even now works in the Walker college athletic department. Shea reaches a point in her life where she wonders if she is doing what she should be doing. Her job has become routine, she is dating a man named Miller who is not Mr. Right but she does not know how to end the relationship. The one constant in Shea's life is Coach Carr to whom she looks for guidance and inspiration. Coach Carr advises Shea to find a better job and helps her to connect with the Sports Editor at the Dallas Post where she gets a writing job covering the Walker College sports program. Shea breaks up with Miller and begins a romantic relationship with a former Walker classmate, Ryan James, who is now the star quarterback of the Dallas Cowboys football team. Ryan is the catch of a lifetime, and although Shea begins to have feelings for him, she cannot help but think about Coach Carr in increasingly romantic ways.

Before long, it is revealed that the NCAA is investigating Walker for improprieties which are not named. Shea learns that Ryan's father had purchased a new car for a receiver on the Walker team when Ryan went to school there and that could be just the tip of the iceberg of inappropriate activities. Shea continues to date Ryan who pushes for a closer relationship even though he has just come out of a divorce. Shea wants to love Ryan but her feelings are complicated by more romantic feelings about Coach Carr. Ryan's ex-wife visits Shea to tell her about Ryan's abusive and violent behavior but Shea does not see this side of him.

All those in Walker are vested in the current football season in which Walker remains undefeated and gets to go to the Cotton Bowl. Shea and Coach Carr share their feelings for each other but are not sure how to act on them and what the impact of any relationship will have on their families. Ryan's violent side comes out when he accuses Shea of continuing to see Miller and he attacks her in her apartment one night. Coach Carr intervenes and Ryan spends some desolate days trying to get Shea back after she breaks up with him. Lucy catches Coach kissing Shea's hand at a Christmas event and is devastated that Shea could consider her father for a romantic partner. Lucy issues an ultimatum to Shea that she can have a relationship with Coach or a continuing friendship with Lucy, but she cannot have both. Shea quits her job at the newspaper because she can no longer be impartial where Coach Carr and the Walker football team are concerned.

Shea visits her father in New York over the Christmas holiday and tries to envision a new life away from Texas. Shea returns to Texas and reconciles with Lucy and stays away from Coach Carr. Walker wins the bowl game and Lucy apologizes to Shea, giving Shea permission to date her father.