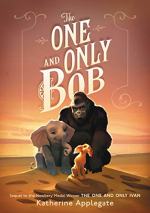 The One and Only Bob Summary & Study Guide

Katherine Applegate
This Study Guide consists of approximately 36 pages of chapter summaries, quotes, character analysis, themes, and more - everything you need to sharpen your knowledge of The One and Only Bob.

The One and Only Bob Summary & Study Guide Description

The One and Only Bob Summary & Study Guide includes comprehensive information and analysis to help you understand the book. This study guide contains the following sections:

This detailed literature summary also contains Quotes and a Free Quiz on The One and Only Bob by Katherine Applegate.

The following version of this book was used to create this study guide: Applegate, Katherine. The One and Only Bob. Harper Collins, 2020. Kindle.

The One and Only Bob is the second novel in the One and Only Ivan series. Bob is a three-year-old mutt that resembles a Chihuahua mixed with a papillon. Bob’s best friend is a gorilla named Ivan and an elephant named Ruby. When Bob was just a puppy, alone and abandoned, he had snuck into the mall where Ivan was being kept in an enclosure for entertainment and cuddled up with the great gorilla. When Ivan woke up, he and Bob became the closest of friends.

Bob had been born under a human’s porch with five other puppies. One day, the man who owned his mother took all the puppies into his truck and drove onto the highway. He threw them all out the window, one by one. Bob had survived and walked to the mall where he met Ivan.

Bob lived as a stray dog for the next two years, though he spent most of his time with Ivan. Ivan had lived in the mall for 27 years with an old elephant named Stella. Shortly after a baby elephant, Ruby, came to live with them, Stella died. Stella made Ivan promise to get Ruby out of the mall, and Ivan did so by painting pictures that inspired activists to move him and Ruby to a sanctuary. Bob was adopted by Julia, a girl whose dad worked in the sanctuary, and Bob had been enjoying domestic life for the past year, though he still considered himself rugged and streetwise.

One day, Bob wakes up from a nightmare in which he was in a flooding river with Ivan and Ruby. He wanted to save them, but he did not know how. He heard a familiar bark and then woke up, anxious and nervous. Julia and her family watch the news and learn that a hurricane is coming. Bob can smell the storm in the wind.

Julia takes Bob to the sanctuary to visit Ivan and Ruby. They stop by the main office and say hello to Julia’s dad, George, who tells her to be quick because the storm is coming. Julia puts Bob in her backpack and they walk to the gorilla enclosure, which is conveniently located right next to the elephant enclosure. Bob sits on the wall between the two and talks to both his friends. The weather gets worse and the elephants call Ruby to come inside. Ivan goes inside with the other gorillas as well, and then George runs out and tells Julia they have to leave immediately. Bob runs toward her, but he slips and falls off the wall into the gorilla enclosure. Julia screams, but George pulls her away and says Bob will be fine.

Alone, Bob struggles to his feet and is then shocked when a tornado sweeps down and lifts him up, then flings him into the giraffe enclosure. He is terrified, but he gets up and starts to help the animals around him. Many of the walls have come down, and this makes him nervous, especially when he realizes the dangerous wolves have escaped.

Bob tries to find Ivan and Ruby, but the storm makes it hard for him to distinguish individual smells. Finally, Bob finds Ruby. They help the other elephants rescue a baby gorilla from the river, then they go off in search of Ivan. They find him buried under rubble.

Humans and canine police officers dig Ivan out of the rubble and everyone cheers when he sits up and eats a banana. Next, Bob plans to go find Julia and George, but then he hears the bark from his dream. He runs off and tells Ruby to watch over Ivan for him.

Bob explains to the reader that he has been looking for his sister, Boss, ever since he was a puppy. He thought he was the only puppy to survive at first, but then he heard Boss barking from the highway shortly after he was tossed out the window. When her barks stopped, he was relieved because he did not want to have to go watch her die. After he had settled in with Ivan, he regretted his decision. He searched the highway for Boss all the time, but he never found her.

Boss’s bark was the bark from his dream, and he hears it coming from inside the animal shelter near the sanctuary. Bob runs into the shelter and is put in a cage by a rescue worker. The shelter is crowded, so Bob is put in a cage with Boss, and the two reunite happily.

The police tell the shelter workers they have to leave, so they load up as many animals as possible and promise to return to the others. Bob thinks they are doomed, but then Ivan and Ruby come and rescue them all, depositing them at a doughnut shop.

Boss, injured, tells Bob that she has had countless litters and all her puppies are dead, but she left one in an abandoned car before she was captured by the shelter workers. Bob, Ivan, and Ruby go to find the puppy, but Ivan and Ruby have to sit and act calm when police see them so that they do not get shot.

Bob continues alone and finds the puppy in a car floating in the river. Bob jumps in and rescues the puppy. The wolf, Kimu, pulls them out of the river, but Bob saves the puppy. Together, they curl up under a tree and wait for Julia.

After the storm, the sanctuary is rebuilt and all the animals, except the wolves, are placed back in their cages. Julia adopts the puppy, but Bob is sad that Boss took off from the doughnut shop and has been untraceable. At the end of the novel, Boss comes to Bob’s house and barks for him to let her in.

More summaries and resources for teaching or studying The One and Only Bob.

The One and Only Bob from BookRags. (c)2022 BookRags, Inc. All rights reserved.