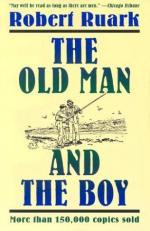 The Old Man and the Boy Summary & Study Guide

Robert Ruark
This Study Guide consists of approximately 34 pages of chapter summaries, quotes, character analysis, themes, and more - everything you need to sharpen your knowledge of The Old Man and the Boy.

The Old Man and the Boy Summary & Study Guide Description

The Old Man and the Boy Summary & Study Guide includes comprehensive information and analysis to help you understand the book. This study guide contains the following sections:

This detailed literature summary also contains Topics for Discussion and a Free Quiz on The Old Man and the Boy by Robert Ruark.

Bobby is a young boy growing up in South Carolina in the 1920s. He spends as much time as he can outdoors, and his grandfather teaches him how to hunt, fish, and be a gentleman. Over the years, Bobby becomes obsessed with hunting, and learns a lot of life lessons.

When Bobby is six, he gets an air rifle for Christmas, to learn to shoot with. This is taken away after he shoots a mockingbird. A few years later he is given a real 20-gauge rifle, and the Old Man, his grandfather, teaches him how to hunt quail with it. A few years later, the 20-gauge is upgraded to a shotgun, and Bobby hunts all over the county with his grandfather. Most of the local landowners will allow no one but the Old Man and Bobby to hunt on their property, and Bobby and the Old Man always share some of their catch with their hosts. Bobby also loves fishing, and since they live on a marshy coast, there is different fishing almost all year round.

The Old Man teaches Bobby that it is very important to be a gentleman. By this he does not mean that he wants Bobby to know about dinner party etiquette, or not to drink or swear. The Old Man wants Bobby to put others before himself and always respect the rights of others, whether they are an animal or human. The Old Man teaches Bobby that when duck hunting, all he has to do is follow the dogs, and let them do the hunting. Bobby hates school, but the Old Man wants him to know about the world around him, and tells him that he can not hunt if his grades do not get better. Bobby realizes, to his surprise, that he loves reading, and once he starts, his grades get a lot better. The Old Man also stresses the importance of conservation, seeing his prey as something which must be maintained, if it is to be harvested every year.

When Bobby is in high school, the Old Man realizes that he is dying, and he tells Bobby that he is proud of him. The Old Man has done what he could, and Bobby has grown up to be a gentleman who respects others, and takes care of the earth. Years later, Bobby fights in World War II, and then ends up hunting a lot on safari in Africa. He never forgets the lessons he learned from the hunters and fishermen who surrounded him in his youth, especially the wisdom of the Old Man.

More summaries and resources for teaching or studying The Old Man and the Boy.

The Old Man and the Boy from BookRags. (c)2022 BookRags, Inc. All rights reserved.