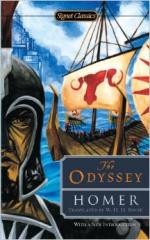 The Odyssey Summary & Study Guide includes comprehensive information and analysis to help you understand the book. This study guide contains the following sections:

This detailed literature summary also contains Quotes and a Free Quiz on The Odyssey by Homer.

The Odyssey is an ancient Greek epic telling the story of the hero Odysseus’ journey home from the Trojan War. He battles monsters and magic, loses all his men, is shipwrecked, and finally washed up on the demi-goddess Calypso’s shore. She keeps him with her for years before the gods intervene. He tells his story to the Phaeacians, who then take him to his home on Ithaca. He fights the suitors who have invaded his home and is finally reunited with his family.

The story begins with a council of the gods, where it is decided to order Calypso to let Odysseus go. Hermes, the messenger god, takes the message, and Calypso helps the hero to build a raft.

On Ithaca, Odysseus’ home has been invaded by suitors who want to marry his wife. It has been twenty years since Odysseus left to go to war, but Penelope still holds out hope that her husband will return. The goddess Athene appears to Odysseus’ son Telemachus and tells him to travel to Pylos for news of his father. Telemachus does so, and is received at both Pylos and Sparta by old friends of his father. He is treated well, and travels home with both gifts and hopeful news. Meanwhile, the suitors plan to kill Telemachus when he returns.

Odysseus is on his raft when the sea-god Poseidon, who hates the hero, sends a storm to wreck him. Odysseus is washed up on the island of Phaeacia, where the princess Nausicaa discovers him while washing her clothes by the river. He begs for help and she directs him to the palace, where he appeals to her father, King Alcinous, and her mother, Queen Arete. Odysseus is given hospitality, and he begins to tell the story of his travels to the gathered Phaeacians:

On his way home from Troy, Odysseus and his men first raided the Cicones’ city, then came across a land where people ate a drug-like Lotus plant. They stopped off at the Cyclopes’ island and were trapped in a cave by the Cyclops Polyphemus. Odysseus got the monster drunk and then blinded it, and he and his men escaped. However, he could not resist boasting of his great name to the Cyclops, and Polyphemus then called on his father Poseidon to curse the hero.

Next they were forced to flee from man-eating giants called Laestrygonians and were given a bag of winds by Aeolus, the lord of the winds, to help them home. Unfortunately, Odysseus’ men were too curious and opened the bag, and so they were blown far off course. They next came to the island of the witch Circe, who turned Odysseus’ men into animals. Odysseus saved them, however, and Circe then became friendly. She told them they needed to go to the land of the dead to consult the blind prophet Teiresias. They did so, and they were given advice about the future journey. They passed the Sirens, the monster Scylla, and the whirlpool Charybids. They stopped at Thrinacie. There Odysseus’ men ate the cattle of the Sun-god, and their ship was wrecked as punishment. Now Odysseus’ men were all dead, and he was washed up on the shore of Calypso’s island, where the demi-goddess took him in.

Odysseus finishes telling the Phaeacians his story, and they are so impressed that they give him gifts and then take him home to Ithaca. There the goddess Athene gives the hero advice, and he goes in disguise to his servant’s hut. With the help of his son, who has returned safely from his own journey, they discover which servants have remained loyal and which have not. Odysseus, in the disguise of a beggar, sees firsthand what the horrible behavior of the suitors is like.

Penelope has set a test for the suitors, hoping that none of them will be able to pass it. They have to string Odysseus’ bow and shoot an arrow through twelve axes. None can do it, but then Odysseus tries and succeeds straight away. With the help of Telemachus and two loyal servants, he then kills all the suitors and punishes the disloyal servants. He is finally reunited with his wife and his father. With the help of the gods he settles the dispute with the suitors’ families, and peace is established.