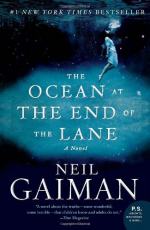 The Ocean at the End of the Lane Summary & Study Guide

Neil Gaiman
This Study Guide consists of approximately 27 pages of chapter summaries, quotes, character analysis, themes, and more - everything you need to sharpen your knowledge of The Ocean at the End of the Lane.

The Ocean at the End of the Lane Summary & Study Guide includes comprehensive information and analysis to help you understand the book. This study guide contains the following sections:

This detailed literature summary also contains Quotes and a Free Quiz on The Ocean at the End of the Lane by Neil Gaiman.

In The Ocean at the End of the Lane, by Neil Gaiman, the middle-aged narrator returns to his hometown to attend a funeral. While there he goes to his childhood home. The visit back to the place where he and his sister had grown up brings back memories of a girl named Lettie Hempstock. She was easy to remember because she had told everyone that the pond in back of her house was really an ocean. Now, as a grown man, the narrator decides to stop by Lettie's house. He walks to the pond, and Mrs. Hempstock comes out to greet him.

At this point in the story, the narrator goes back in time to recount events from his childhood. He remembers an opal miner who stayed as a boarder at his home. The opal miner stole his father's car. Then, he committed suicide in the back seat. It's possible that his suicide had occurred because of gambling debts. Whatever the reason for his death, shortly thereafter someone or something began leaving money for people in weird ways. For example, the narrator was almost choked to death by a coin that entered his throat while he slept. He survived with the help of Lettie.

As the flashback continues, the narrator's mother takes a new job. A lady named Ursula Monkton begins taking care of the narrator and his sister. Though his dad and sister like Ursula, the narrator strongly dislikes her; so, he spends most of his time in his bedroom avoiding Ursula. The narrator's feelings about Ursula are well grounded. Her purpose is to disturb the universe. She does this by giving people what they want, knowing that those things will cause unhappiness later.

Only Lettie knows how to get rid of Ursula by summoning hunger birds. The scavengers attack Ursula. Unfortunately, they try to harm the narrator, too. However, once again, he is saved by Lettie and her family who take him to their house. Eventually, the hunger birds try again to attack the narrator. Lettie saves him once more by jumping between him and the monsters. Finally, it is Grandmother Hempstock who is successful in getting the birds to leave. But, before the hungry birds exit, Lettie is badly injured. She is placed in the river, which she had called an ocean, to rest until she can come back to the real world. Being a child, the narrator does not connect the reality of death to Lettie's resting in the ocean. He thinks that she has gone to Australia.

The setting reverts to the present. Once again the narrator is a middle-aged man who has stopped by The Hempstocks after a funeral. They tell him that he has been back to his hometown before. He is surprised to hear this. He tells Lettie's family to tell her "hello" for him when she gets in touch from Australia.

The Ocean at the End of the Lane from BookRags. (c)2022 BookRags, Inc. All rights reserved.