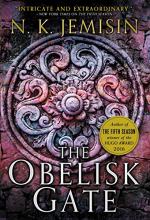 This detailed literature summary also contains Quotes and a Free Quiz on The Obelisk Gate by Jemisi, N. K..

The following version of the novel was used to create this study guide: Jemisin, J.N. The Obelisk Gate. Orbit, August 16, 2016.

In The Obelisk Gate, the sequel to The Fifth Season in the Broken Earth series by N.J. Jemisin, Essun enlists the help of Alabaster, her mentor. The two of them begin to piece together how the Fifth Season began. Essun also begins understanding the potential role of the obelisks in ending the periods of winter that threaten to make humans extinct. With another Season in progress, Essun takes shelter in Castrima, but that comm is soon torn apart by infighting initiated by an enemy comm hoping to take over the people as resources.

Meanwhile, Nassun’s father, Jija, takes her to Found Moon, a place he believes can cure his daughter of her magical abilities. Instead, Nassun meets Schaffa, the man who served as her mother’s Guardian. Schaffa encourages Nassun to hone her skills and abilities because he believes she exists for a special purpose.

In Castrima, Essun learns from Alabaster that he was not trying to end the world by creating the rift in the continent that touched off the Season. Instead, he was taking the first step in curing the problem. He explains how past people used a system of obelisks as a power source. A problem with the obelisks caused the moon to be thrown out of orbit, angering Father Earth who has hated the orogenes who created the obelisk system ever since. The obelisks still exist and Alabaster has learned that this network, along with energy from the rift, can be used to draw the moon back into orbit, putting an end to the Seasons. Because Alabaster can no longer access to what he calls the Obelisk Gate, a punishment for having used it once, he asks Essun to finish what he started.

Unfortunately, the atmosphere in Castrima, a comm that includes many orogenes, has become charged against them. A larger neighboring comm, Rennanis is trying to take over the smaller comm so it can benefit from the resources Castrima offers. One stipulation of Castrima joining Rennanis is that Castrima get rid of its orogenes. Ykka, the leader of Castrima puts the decision to join Rennanis to a vote but in the hours leading up to that vote, violence breaks out between the orogenes, those with magical abilities, and the stills, those without these abilities. When Essun sees a woman raising her fist to hit an orogene child, she is reminded of the way her husband beat her son, Uche, to death when he discovered the child was an orogene. In her anger, Essun turns the woman to stone. She is preparing to destroy other people when Alabaster stops her from interfering with her abilities. This use of his orogeny ends Alabaster’s life and turns him to stone.

Realizing what she has done, Essun swears that Alabaster’s act of giving his life to save the people of Castrima will not have been done in vain. When the time to vote arrives Essun destroys the ballot box. She tells her community members that no one gets to decide who has the right to be a person. If they want to be part of that community, they need to accept all of its members. Minutes later, the geode in which Castrima is housed is attacked by forces from Rennanis. Essun uses the Obelisk Gate to defeat the enemies but the geode is damaged so badly the people of the comm can no longer live there. However, because all of the people of Rennanis were killed by Essun, the people of Castrima decide to leave their geode and move to that abandoned comm.

Meanwhile, Jija takes Nassun, the daughter he had with Essun to Found Moon, a place Jija had heard could cure orogeny. Instead, Nassun meets Schaffa, her mother’s Guardian who encourages Nassun to grow in her skills. Nassun struggles to understand why her father hates her so much since he has learned that she is an orogene even though she has not changed. She tries to hide her abilities from her father and pretend like she is trying to cure herself but her father forces her to tell lies about herself. They meet one night near Found Moon. Jija has brought a knife to kill her. Realizing that there is no way to end her father’s hate, Jija kills him instead. Steel, a stone eater who seems to have attached himself to Nassun, tells Nassun that there will always be hate in the world unless she helps him bring the moon back into orbit. She agrees to help.