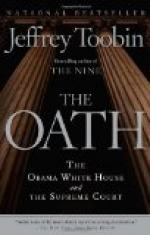 The Oath: The Obama White House and the Supreme Court Summary & Study Guide

Jeffrey Toobin
This Study Guide consists of approximately 28 pages of chapter summaries, quotes, character analysis, themes, and more - everything you need to sharpen your knowledge of The Oath: The Obama White House and the Supreme Court.

The Oath: The Obama White House and the Supreme Court Summary & Study Guide includes comprehensive information and analysis to help you understand the book. This study guide contains the following sections:

This detailed literature summary also contains Topics for Discussion on The Oath: The Obama White House and the Supreme Court by Jeffrey Toobin.

"The Oath: The Obama White House and the Supreme Court", written by liberal American lawyer, author and legal analyst for CNN, Jeffrey Toobin, provides an insider's view of the ideological conflict between Supreme Court Chief Justice John Roberts and conservative jurisprudence and the policies of the Obama Administration. Toobin is a clear partisan, constantly criticizing conservatives for hypocrisy, venom, ideology and the like. While Toobin pays some respect to Roberts, he characterized Roberts as a partisan of the Republican Party, contrasting him with the liberals on the court, whom he describes in positive and often glowing terms.

One aim of the book is to illustrate just how much conflict there is between the conservative Roberts Court and the Obama Administration, illustrated from the start when John Roberts swore Barack Obama into the office of the presidency with a well-known erroneous repetition of the oath of office. Toobin thinks that Obama is the real conservative, as he only believed in incremental change led by Democratic movements. Obama is seen as a pragmatist, not an ideologue. But the Roberts court is prepared to rewrite the constitution to undo the greatest progressive victory—the New Deal.

The Oath is divided into an introduction, epilogue and twenty-three chapters spread over five parts. Over the course of the book, Toobin introduces a variety of personalities, biographies and jurisprudential attitudes, though largely in chronological order, beginning roughly with Roberts's appointment to the SCOTUS and ending with Roberts' decision in the Obamacare/Affordable Care Act ruling (known as Sebilius). Part One contrasts Obama and Roberts' political views and personal history, along with making the first part of the case that the Roberts Court is an activist court. In Part Two, Toobin reviews constitutional issues surrounding gun control, Obama's "unrequited" bipartisanship and the appointment of Sonia Sotomayor to the court. Part Three focuses on the Citizens United case, which upheld the legality of corporation political contributions to affect election outcomes, and outraged progressives, so much so that Obama attacked the court in one of his state of the union addresses.

Part four attempts to draw out a point made throughout the book, namely that some of the "liberals" on the court were appointed by moderate Republicans and watched the Republican Party move sharply to the right of them. He brings Justice Thomas in for particular scrutiny. Part Five largely covers the story of Sebilius. The book then ends with what amounts to an editorial, where Toobin warns his readers that despite the fact that John Roberts did not give into "extremism" by overruling Obamacare, that he is still a dangerous judicial activist. His ruling was intended to buy political space for the court to continue its activist judicial agenda and that he is a full partisan for the Republican Party. He also argues that the Roberts Court has proven that the constitution really is living, as liberals have long argued, by their judicial activism. The constitution "lives" because the conservatives are prepared to change its meaning to suit their political agenda.

More summaries and resources for teaching or studying The Oath: The Obama White House and the Supreme Court.

The Oath: The Obama White House and the Supreme Court from Gale. ©2005-2006 Thomson Gale, a part of the Thomson Corporation. All rights reserved.