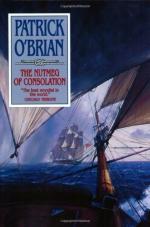 Patrick O'Brian
This Study Guide consists of approximately 34 pages of chapter summaries, quotes, character analysis, themes, and more - everything you need to sharpen your knowledge of The Nutmeg of Consolation.

The Nutmeg of Consolation Summary & Study Guide includes comprehensive information and analysis to help you understand the book. This study guide contains the following sections:

This detailed literature summary also contains Topics for Discussion and a Free Quiz on The Nutmeg of Consolation by Patrick O'Brian.

Jack Aubrey, Stephen Maturin, and the other survivors of the wreck of HMS Diane spend several weeks as castaways on an unnamed island in the South China Sea. They recover food, tools, supplies, lumber, and nails from the wreck and begin to construct a schooner that they hope will carry them the two hundred nautical miles to Batavia. While Aubrey oversees the construction efforts, Maturin hunts the island's game for food. As the schooner begins to take basic form the island is visited by a small group of seafaring Dyaks who express much interest in the camp and promise to deliver a message to Batavia, asking for supplies. The Dyaks prove treacherous, however, and return with a huge piratical force intent on murdering the seamen and stealing their tools and wealth. A fierce combat ensues and Aubrey's men are victorious, sinking the pirate's large proa in the deadly tide rip as the few surviving pirates attempt to escape. Unfortunately for Aubrey, the pirates burn the partially completed schooner and the other supplies and stores. The situation looks grim indeed for the marooned British seamen. Fortunately, out hunting, Maturin stumbles upon a Chinese Junk anchored off the far shore. The Chinese captain takes the survivors aboard and transports them safely to Batavia where they are received by Governor Raffles.

Raffles provides Aubrey with a recently outfitted ship, the Dutch-built HMS Nutmeg of Consolation, its peculiar name derived from Aubrey's fancy. Aubrey supplies the ship and takes to sea with the intent of finding the French frigate Cornélie. Maturin has derived information on Cornélie's status and likely position and with the assistance of a passing ship Aubrey locates the French frigate at the island of Nil Desperandum. A surprise attack on the larger French ship is attempted but fails and a lengthy nautical pursuit ensues, Aubrey drawing the French ship into another potential ambush site. The tables turn completely as Surprise appears with several consorts. Surprise, under Tom Pullings, chases down Cornélie and the French ship founders and sinks. Aubrey then resumes command of Surprise and, with Maturin, Nathaniel Martin, and Pullings, proceeds to New South Wales. On the voyage Maturin rescues two Melanesian girls from the fictional Sweeting's Island, they being the only survivors of an epidemic of smallpox.

At New South Wales Aubrey refits and resupplies slowly, irritated at the amount of local corruption and graft. Meanwhile Maturin enrages a local scalawag and successfully fights a duel. He learns that his friend and one-time loblolly-boy Padeen Colman is suffering imprisonment at the penal colony and contrives a somewhat elaborate plan to help him escape. During this period Martin meets his old friend John Paulton and enlists his assistance in Colman's escape. At the end of the novel Surprise completes her refitting and readies for sea while Maturin and Martin travel to a rendezvous spot and meet the absconding Colman. On the way Maturin sees a platypus and captures it with the intent of examining the exotic marsupial. The animal delivers a poisonous sting to Maturin who collapses. He is carried aboard by Colman and the extreme circumstances mollify Aubrey's anger at Maturin's bringing of a convict aboard. Maturin survives the poison and Surprise sails away.

More summaries and resources for teaching or studying The Nutmeg of Consolation.

The Nutmeg of Consolation from BookRags. (c)2022 BookRags, Inc. All rights reserved.