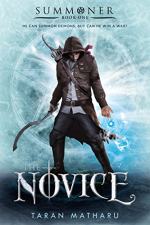 Taran Matharu
This Study Guide consists of approximately 58 pages of chapter summaries, quotes, character analysis, themes, and more - everything you need to sharpen your knowledge of The Novice.

This detailed literature summary also contains Quotes and a Free Quiz on The Novice: Summoner by Taran Matharu.

Fletcher Wulf is 15 years old as the novel opens. He lives in the small village of Pelt. He is an orphan who was abandoned at the village gates when he was an infant. A blacksmith named Berdon took Fletcher in, gave him a home and education, and taught him a skill. As a teenager, Fletcher has an ongoing feud with the town bully, Didric. Didric's father is arguably the most powerful man in the village, mainly because of his wealth. Didric is spoiled and expects to always get his way. When Fletcher and others in the village set up for market day, Fletcher is interested in a man named Rotherham who has several strange items in his possessions. Most of the items are related to the ongoing war against the orcs, a race of large beings that are almost impossible to kill. Rotherham shows off one of the items which is a book that he claims belonged to a battle mage named James Baker. The mage had meticulously recorded information about the demons that mages used to increase their power as well as the magic he had performed and observed. Didric predictably demands that Rotherham hand the manuscript over for a fraction of his asking price. Rotherham refuses. When Rotherham sees Didric making derisive comments to Fletcher, he immediately buys a weapon from Fletcher's stall and befriends him. That evening, Fletcher and Rotherham spend time together in a tavern and wind up in a fight with Didric and one of Didric's friends. Rotherham advises Fletcher not to fight fair, and the two come out on top. Rotherham spends the night at the blacksmith shop with Fletcher. The next morning, Fletcher wakes to find Rotherham is gone, but he left the book for Fletcher.

Fletcher goes to a local cemetery and tries out a spell to summon a demon. The demons are small creatures that aid mages, especially in battles. Fletcher is amazed to discover that the words roll off his tongue like something he had always known. He summons a Salamander but Didric arrives at the cemetery with two of his friends. When Didric corners Fletcher, the small demon comes to Fletcher's aid and they defeat the bully. Fletcher knows he will be punished for this fight with Didric and he leaves the village with Berdon's blessing. He arrives in the town of Corcillum and is almost immediately discovered by a mage named Arcturus who directs Fletcher to Vocans Academy. Fletcher is quickly accepted into the program because the humans are struggling to hold the front against the orcs. Fletcher is an acceptable student, but he does not excel in all areas. He soon makes enemies of some of the students from noble families who resent that the academy is allowing commoners into the program.

Fletcher makes friends with an elf and a dwarf as the students are caught up in the politics of this world. As the first year of study nears an end, all the students at Vocans Academy participate in a series of contests to determine which of them will earn a seat on the country's council of rulers and a lead position in the military. Fletcher wins but the novel comes to a close as some members of the noble class arrive to arrest Fletcher for the fight he had with Didric.

More summaries and resources for teaching or studying The Novice: Summoner.