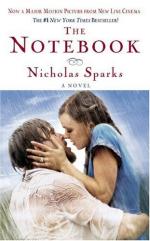 Nicholas Sparks (author)
This Study Guide consists of approximately 32 pages of chapter summaries, quotes, character analysis, themes, and more - everything you need to sharpen your knowledge of The Notebook.

The Notebook Summary & Study Guide includes comprehensive information and analysis to help you understand the book. This study guide contains the following sections:

This detailed literature summary also contains Topics for Discussion and a Free Quiz on The Notebook by Nicholas Sparks (author).

Noah begins by saying that he is eighty years old, that he does not regret any of the paths he has chosen to travel, and that the paths today are more rocky than those of years ago. He describes his day in the nursing home. He says that he picks up a notebook that he has read many times and passes many doors. The people inside - like he - have gotten accustomed to being alone with only a television for company, and that a person can get used to anything. He reaches a particular room and goes inside where he is greeted by nurses caring for a woman who is obviously upset. Noah says mornings are always difficult and she will calm down later when the nurses have gone. Noah knows the odds and science are both against him, and that he simply hopes for a miracle. Believing in prayer as he does, he takes time to pray as he opens the book, puts on glasses and picks up a magnifying glass, and prepares to read.

The notebook is the story of Noah and Allie, two who were lovers as teenagers in a summer romance, but who were then separated by Allie's parents who felt Noah wasn't the best man for her. Noah writes letters to Allie over the years, but Allie's mother withholds them and Allie assumes Noah has forgotten her. Noah works, joins the military and inherits money from a previous employer that allows him to buy a historic house and repair it. It's then that Allie comes to visit him, three weeks from her wedding date but seemingly unable to marry without seeing Noah one more time. The love between them immediately springs to life and Noah begs Allie to remain. She leaves but realizes she can't love anyone like she loves Noah and returns to him.

This is the story Noah reads to Allie and occasionally she responds to him, though the medical professionals say her response is impossible. On a particular day, Noah reads the story and Allie asks which man the woman in the story chooses. She confesses that she doesn't know Noah and doesn't know her own name. They talk for hours with Allie later saying she knows which of the two the woman in the story picked, though she doesn't seem yet to equate that story with herself. Noah admits that it breaks his heart that she doesn't know him, but that these days are much better than the days in which he tried to make her remember. He says that on those days, they'd both be exhausted with him answering questions and her anguish at having lost everything, including memories of her children.

Through their lives, the two have written letters to each other and these provide memories for Noah. He likens living this near Allie without ever again being able to fully possess her love to the relationship between day and night, combined at dusk but never quite touching.

Then Noah suffers a stroke and for awhile it seems he might not survive. When he does return to the nursing facility where he and Allie have lived since the onset of her Alzheimer's, he wants to see her. It's their forty-ninth anniversary but it's also against the rules for him to visit her at night. After bedtime, she's typically easily frightened, never knows him and is anxious if awakened. On this particular night, he is confronted by a nurse who is touched by his love for Allie and who turns her head as he shuffles past. When he reaches her room, he vows not to wake her but does anyway. When she sees him, there's a light of recognition in her eyes as she begins to unbutton his shirt

The Notebook from BookRags. (c)2022 BookRags, Inc. All rights reserved.