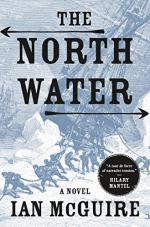 Ian McGuire
This Study Guide consists of approximately 38 pages of chapter summaries, quotes, character analysis, themes, and more - everything you need to sharpen your knowledge of The North Water.

This detailed literature summary also contains Quotes and a Free Quiz on The North Water by Ian McGuire.

NOTE: Citations from this Study Guide refer to the paperback edition of The North Water, published by Henry Holt and Company, 2016.

The North Water by Ian McGuire, a historical fiction/thriller, is told from an omniscient narrator focusing on the point of view of a ship's surgeon, Patrick Sumner, who is the protagonist. After leaving India where he had been stationed by the British colonial health system during a time of great unrest, Sumner signs up for a stint with the Volunteer, a sealing/whaling ship whose mission is to collect as much blubber and seal fur as possible for the European energy markets.

The surgeon hoards a good supply of drugs with the goal of enjoying a chemical holiday while he writes poetry in a kind of blissed-out escape from reality.

Sumner has no inkling that what he really has done is throw his lot in with professional criminals who intend to scuttle the ship in the north waters off England and collect the maritime insurance. He also has no idea that he will be in the company of murderers, rapists, psychopaths, and social misfits. What he hopes will be a kind of paid vacation turns out to be a fierce struggle for survival against the harsh northern elements as well as the schemes of the crew.

The author creates a perfect pressure-cooker setting for this violent story by using all male primary characters, with the one exception of an Eskimo wife who is loaned as a kind of chattel by an Eskimo man to Sumner when he lives for a time among the natives. But the mood throughout is icy. There is only the harshness of the arctic environment, ice, snow, seals and desperate men. This apocalyptic scenario is punctuated by two murders committed by Drax, who is clearly the villain in this tale.

In one instance, Drax rapes and kills a young deckhand and stuffs his body in a shipping crate; in another he cripples Captain Brownlee in a savage and largely unprovoked attack.

To an extent, the legitimate sealing and whaling operations of the Volunteer conflict with herding and hunting practices by local Eskimo tribes. The Europeans maintain a delicate balance with the indigenous people by trading in furs, rifles and other goods. The Eskimos treat the interlopers with a thin veneer of tolerance that covers a deeper suspicion of their methods and motives.

A secondary theme is Sumner's struggle with an addiction to laudanum (morphine), which may have played a role in his departure from India. His primary antagonist is a crusty and depraved old sea dog named Henry Drax who lives by his own laws and is devoid of any human warmth or compassion. Drax conspires with Jacob Baxter, an agent for the insurance company, to sink the Volunteer and take as many crew members to their deaths as possible to eliminate witnesses who may testify in subsequent legal actions in London.

Once the ship is scuttled and the surviving crew creates makeshift shelters for themselves, they are rescued by another ship heading back to England. Sumner lands in Lerwick and makes his way to a suburb of London where he hopes to find Baxter so he can collect his unpaid wages. When he finds Baxter, Sumner realizes that Drax has already returned to England and is living with Baxter as his servant and co-conspirator.

In a surprising twist, Sumner turns the tables on both Drax and Baxter when he disrupts their plan to kill him in the dark of night at the docks to prevent him from unmasking their conspiracy. Drax pursues Sumner across the docks until Sumner hides in a small shed. When Drax enters with his gun in hand, Sumner attacks him with a large ice saw and nearly decapitates him. Sumner then collects his wages, and returns by train to London.

More summaries and resources for teaching or studying The North Water.