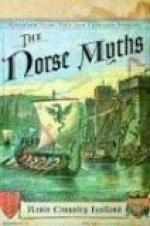 This detailed literature summary also contains Topics for Discussion and a Free Quiz on The Norse Myths by Kevin Crossley-Holland.

In The Norse Myths, Kevin Crossley-Holland gathers together thirty-two myths important to the Scandinavian culture. These myths provide explanations for the ways of the ancient world and give the reader insight into the beliefs of the Nordic pagans. While the myths themselves are certainly not true, the strong belief in them held by the pagan culture is factual. The gods and goddesses of the Norse myths were the only connection to a spiritual world prior to the introduction of Christianity. The giants, dwarfs, and monsters the gods battle against are manifestations of the ancient Norse's frustrations with their own lives. A great deal of life was a mystery and some explanation was needed in order to feel that a man held a purpose on earth.

The myths tell how the world was created from a great void where ice and flame collided. The gods shaped the earth from the body of a slain giant after two humans dropped from his armpits and a son came from his heel. The gods spend their days taunting the giants, disguising themselves in order to play tricks on humans, and engaging in general debauchery amongst themselves. The gods are free to interfere in the lives of men as they please by altering the course of battles or making kings out of horrible men. The gods have little to fear except for one of their own who seems fallen from their good graces. Loki is the trickster who nearly costs the gods their lives, brings forth evil children who will destroy the gods at Ragnarok, and acts only for his own benefit.

Crossley-Holland presents the Norse myths in a very educated and well researched manner. He spends a great deal of time introducing the reader to the myths and provides strong notes that allow the reader to clarify inconsistencies or confusing passages. Crossley-Holland does not take lightly his subject matter and wishes to impress upon the reader that the value of these myths is very real. The myths bring order to a confusing existence. They explain the great mysteries of life, give man something to believe in and hope for, and teach lessons. The Norse myths are the backbone of a culture. As such, they should be treated with respect and not read lightly.