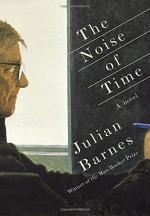 Julian Barnes
This Study Guide consists of approximately 44 pages of chapter summaries, quotes, character analysis, themes, and more - everything you need to sharpen your knowledge of The Noise of Time.

The Noise of Time Summary & Study Guide includes comprehensive information and analysis to help you understand the book. This study guide contains the following sections:

This detailed literature summary also contains Quotes and a Free Quiz on The Noise of Time by Julian Barnes.

The following version of this book was used to create this study guide: Barnes, Julian. The Noise of Time. Alfred A. Knopf, 2016.

The Noise of Time is a novel about the life of Russian composer Dmitri Dmitrievich Shostakovich. Shostakovich and the other characters in the book are all real figures, and the events are generally true to life, but The Noise of Time is a novel rather than a biography due to its creative structure and liberties. It is structured in three parts, with each part exploring a different period of Shostakovich’s life in a creative and nonlinear fashion. In addition, the narration often explicates Shostakovich’s thoughts and feelings, but these can only be inferences and creative choices by the author. Also, the author occasionally adds dialogue to scenes where the words spoken could only be known by those who were present. The book’s creative structure is used to freely explore the themes and historical scenarios without being tethered to strict recounting of facts.

The scope of the novel extends from Shostakovich’s birth to his death (1906-1975), and most of the novel takes place in Russia during the time of the Soviet Union. The Soviet Union was a bureaucratic dictatorship that ruled over Russia and several neighboring countries. The book examines the Soviet Union under Joseph Stalin and Nikita Khrushchev, as these were two leaders who ruled over Russia for most of Shostakovich’s life. Sections 1 and 2 examine the brutal rule of Stalin, whose programs of execution and forced labor killed tens of millions of people, and Section 3 examines the regime of Khrushchev, who similarly exercised absolute power but without the use of killing.

Dmitri Shostakovich rose quickly to fame and prominence in his music career, and he is often considered one of the most important composers of the twentieth century. The Noise of Time examines how his passion for music, as well as his ensuing fame, make him a target for the Soviet government. In his early career, his musical innovations make him an enemy of the government, who wishes to control musical output. Shostakovich’s musical influences are considered too bourgeois by the government, and his innovations are considered too alienating to the working-class. The Soviet government only endorses music that they see as empowering and easily accessible to the working-class, so they condemn Shostakovich during his early career and come close to having him executed.

By the middle of his career, Shostakovich has achieved international renown, and so Stalin’s administration uses him as a puppet. They send him to America as part of an artistic delegation and force him to parrot their opinions on art and music, even though they do not correspond at all with his own beliefs. Shostakovich continues to compose, but he is mindful to pursue his own artistic standards while being careful not to offend Soviet sensibilities. By the end of his career, he has achieved great renown both within Russia as well as internationally. Under the Khrushchev administration, he is forced to join the Communist Party and the government-run Union of Composers. Shostakovich sees this as a sever compromise of principles on his part, but he holds on to the idea that great music can transcend all the unfortunate events of life.

The Noise of Time also examines Shostakovich’s personal life, from his childhood to his first love to his marriage and family life. While the book focuses more heavily on his career and interactions with the Soviet government, it repeatedly comes back to his personal life and examines how the two spheres interact, both literally and thematically. The examination of his personal life is also used as a method by which to demonstrate and explore his personality. This exploration helps shape the tone, outlook, and themes of the rest of the novel.

More summaries and resources for teaching or studying The Noise of Time.

The Noise of Time from BookRags. (c)2022 BookRags, Inc. All rights reserved.