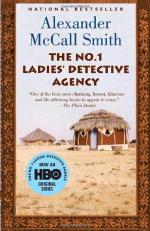 Alexander McCall Smith
This Study Guide consists of approximately 42 pages of chapter summaries, quotes, character analysis, themes, and more - everything you need to sharpen your knowledge of The No. 1 Ladies' Detective Agency.

The No. 1 Ladies' Detective Agency Summary & Study Guide includes comprehensive information and analysis to help you understand the book. This study guide contains the following sections:

This detailed literature summary also contains Topics for Discussion and a Free Quiz on The No. 1 Ladies' Detective Agency by Alexander McCall Smith.

This gently paced mystery novel, set in the African country of Botswana, has as its central character the self-sufficient, wise, and compassionate Precious Ramotswe. As the narrative explores the variety of circumstances that enabled her to start her agency and the agency's first cases, it also explores themes relating to the independence of women, African pride, and relationships between parents and children.

After summarizing how Mma Ramotswe inherited from her father both the means and the will to make an independent living, and how she used both to start the only detective agency in Botswana run by women, the narrative summarizes her first successful case - how she uncovered the true identity of a man posing as a client's father. The narrative then recounts Mma Ramotswe's past in greater detail - her father's youth and young adulthood working in the mines, the death of her mother, the running of the household by a cousin of her father's, and her marriage to a man who both got her pregnant and abused her. Narration also describes how, after the sudden departure of her husband and the death of her father, Mma Ramotswe bought herself a house, started The No. 1 Ladies' Detective Agency, and hired the efficient Mma Grace Makutsi, recently graduated from secretarial college, to work as her assistant and receptionist.

The narrative then follows Mma Ramotswe through her investigation and resolution of several cases - a missing husband, the suspicious employee of an old friend, an over-protective father concerned about the behavior of his daughter, a stolen car, and a pair of fraudulent twin doctors. The case that preoccupies her most, however, is that of a missing boy who, she fears, is connected to the discovery of a human bone in the glove compartment of a van being serviced by her friend, Mr. J.L.B. Matekoni.

Matekoni, it turns out, has feelings for Mma Ramotswe that go beyond friendship, feelings that lead him at times into doing things he doesn't want to do in order to help her. At one point, he asks her to marry him, but for Mma Ramotswe, memories of her abusive husband and her own drive for independence have led her to a rejection of marriage. She firmly, but kindly, rejects Mr. J.L.B. Matekoni's proposal.

Interspersed with all these narrative elements are occasional commentaries on other aspects of Mma Ramotswe's life - her pride in being African, in her home, and in her success, the beauty of the land, and her determination to become a better investigator. This last she accomplishes through careful study of a guide to being a detective. There are also reflections on the death of her prematurely born child, and on her being "traditionally built" ... in other words, contentedly overweight.

Meanwhile, investigations of the source of the human bone eventually lead Mma Ramotswe to a confrontation with the wife of a witch doctor, who tells her the missing boy is working for her and in fact has all his fingers - bones, she says, can be purchased freely in other parts of Africa. She then takes Mma Ramotswe to the cattle ranch where her husband has put the boy to work. Mma Ramotswe hurries him into her van, leaves the witch doctor's wife behind, and drives the boy back home for a reunion with his parents.

After the successful conclusion of the case of the missing boy, Mma Ramotswe asks for Mr. J.L.B. Matekoni's help in repairing the engine of her dust-damaged van. After he's finished work, they sit together and drink tea while waiting for dinner to finish cooking, and Mr. J.L.B. Matekoni again asks Mma Ramotswe to marry him. This time, she says yes.

More summaries and resources for teaching or studying The No. 1 Ladies' Detective Agency.

The No. 1 Ladies' Detective Agency from BookRags. (c)2022 BookRags, Inc. All rights reserved.