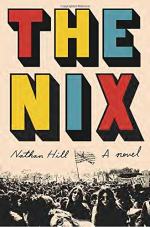 Get The Nix from Amazon.com
View the Study Pack
Study Guide
Order our The Nix Study Guide

Nathan Hill
This Study Guide consists of approximately 112 pages of chapter summaries, quotes, character analysis, themes, and more - everything you need to sharpen your knowledge of The Nix.

The Nix Summary & Study Guide includes comprehensive information and analysis to help you understand the book. This study guide contains the following sections:

This detailed literature summary also contains Quotes and a Free Quiz on The Nix by Nathan Hill.

The novel begins with a heartbreaking scene of a mother leaving her family slowly. Faye Andreson-Anderson is described as being a mom who never really wanted to be a mom—as a woman who does not feel successful in her role as the head of her household. Instead of continuing this, she slowly packs her bags over the course of weeks, ensuring that neither her husband nor her son will notice her impending departure. Her son, Samuel, is only 11 years old when he watches his mother walk out of the house with only one suitcase in tow. This image, and this feeling of unanswered betrayal, will shape Samuel for the rest of his life.

There are ten parts in this book, and each part details the events of different years from various characters’ perspectives. Part One, for example, takes place in 2011. Faye Andreson, as she now refers to herself, has been apart from Samuel for quite some time. She is videotaped throwing rocks at a political figure while he delivers a speech in a park in a Chicago park. This leads to an absolute circus of media coverage in which she is quickly dubbed the, “Packer Attacker.” Samuel is an adult now, working as a novelist and English professor in Illinois. He hates his job, has no friends, and plays World of Elfscape way more than he knows he should. Within each chapter in Part One, the narrator remains an omniscient third person with lengthy dives into the thought patterns of each damaged character.

Part Two whisks us back to the summer of 1988. We meet Samuel in the time just before Faye leaves him. Samuel is a weak and emotional boy who cries often and frustrates Faye with the high level of waterworks. Samuel meets a very odd and war-obsessed boy named Bishop Fall. The two meet in the forested area between their homes and become instant friends. Bishop’s twin sister, Bethany, becomes Samuel’s paradigm for female perfection, and Samuel falls head over heels in love with her from the first moment he lays eyes on her. Meanwhile, Samuel is enjoying his friendship with Bishop, although Bishop tends to be a rather naughty bully who brings Samuel into some pretty dangerous antics. Their friendship collapses the day after Samuel helps Bishop poison a man to death. The next morning, Samuel’s mother leaves him and Bishop’s family removes him from that town forever.

After Hill establishes the time period of crisis when Samuel drastically changes, Part Three exposes us to Samuel’s attempt at researching his mother’s story in 2011. It turns out that Samuel never actually wrote the novel he was paid an advance for. Because of this, his publisher is threatening to sue him. However, thanks to Faye’s recent political activism, Samuel’s publisher is willing to give him one more chance if he drafts a novel all about Faye and what a menace to society she is. Samuel agrees to do this, both out of desperation and a quick emotional desire for revenge. He goes in search of answers, leading him to Faye’s father in Iowa and to her ex-husband in Illinois. No one seems to know the whole truth about her life or why she made some of the decisions that she did. Samuel has a lucky break in Iowa when he discovers some of Faye’s old papers in storage at his grandfather’s nursing home. Samuel quickly learns that Faye spent one month attending college in Chicago but that she quickly left school, returned to Iowa, married Samuel’s father, and raised him until she could not bear it and left again. The better question to Samuel becomes why Faye left Chicago so quickly in 1968.

Part Four focuses on Faye’s life in 1968. She is an awkward teenager with a boyfriend she does not really like all that much. Faye is horrified by the threatening portrayal of husbands and wives, and she frequently contemplates whether or not she should make her own independent life at college. Faye applied in secret but told everyone when she was accepted. Now the whole town seems to weigh in on whether or not college will be good for her. Faye feels crushed by the social pressures of living in a small town. She wants nothing more than to escape them and become her own woman. She is held down by several individuals in her life. Her mother constantly reminds her of the dangers of living in Chicago. Her father, Frank, does see the purpose of school, and her boyfriend, Henry, threatens to join the fight in Vietnam if she leaves him alone in Iowa. She is faced with many choices, but she is eventually pushed out of Iowa because the town is under the impression that she is pregnant. This brings shame to the Andreson family and Frank tells her to get out and never return.

Hill drags readers back to 2011 in Part Five, where we learn that Bishop Fall has been killed while fighting in Iraq. He drifted apart from Samuel and from Bethany, so the only thing they know is that he is dead but they do not know much about what led up to it. The narrative breaks momentarily to give a detailed account of what Bishop’s life was like after he left Illinois. This brings us back to an anti-war protest, where Bethany has invited Samuel march in protest to the Republican National Convention. Samuel is still dealing with his unrequited love for Bethany and he agrees to attend the march because he thinks this will provide an opportunity to rekindle romance with Bethany. She is a mess. Bethany is heartbroken from the loss of her twin brother, but she is also trapped because she is engaged to be married to a man she knows will not make her happy. Bethany tells Samuel that she wants to have sex with him, but Samuel first reads a note from Bishop asking him to leave his sister alone. Samuel leaves the apartment, and spends the rest of his researching in 2011 regretting his decision.

Shortly after his departure from New York City, Samuel is surprised to receive help finding a woman named Alice. Samuel believes that Alice was close with his mother during her brief time in Chicago and he goes in search of answers. Alice is hesitant to talk to Samuel about what happened in Chicago, but she eventually yields. Instead of telling the story from Alice’s point of view in 2011, Part Seven delivers us back to 1968. The narrator remains omniscient, but now we are learning of Faye’s short time at college from her perspective. She is depicted as an anti-social and unpopular student. She is unhappy at college and much more serious than the other students in her dormitory. Faye becomes friends with her dormitory neighbor, Alice, and the two of them develop a fast and deep bond. Alice introduces Faye to some anti-war feminists at the school, and Faye learns of a planned protest at the upcoming Democratic National Convention. Faye meets an anti-war journalist named Sebastian and she falls instantly in love. What no one knows about Alice is that she has been having late-night sexual encounters with a conservative police officer named Charlie Brown. Alice meets with Charlie multiple times a week and the two of them try various sexual fetishes in dark alleyways. Charlie falls in love with Alice and wants to leave his wife for her, but Alice breaks things off because she feels deeply attracted to Faye. Charlie seizes this ping of jealousy and rushes to the campus where he arrests Faye, calls her a whore, and throws her in jail for prostitution.

The arrest takes place the night before the march. Faye is kept overnight and is still in her cell when the fighting and violence begins on the streets. Sebastian shows up and releases her from her cell. The two of them venture out into the streets, where it is more dangerous and the air is polluted with tear gas. Faye has an unfortunate run-in with Charlie, who is enjoying the brutality of hitting hippies with his baton. Charlie spots Faye in the crowd and comes rushing at her at the same moment that a huge group of protestors break through a large hotel window. Charlie falls on the broken window, severing his spinal cord and leaving him paralyzed for the rest of his life.

Faye runs away from the scene with Sebastian, who discloses that he has been working alongside the police to incite violent reactions within the anti-war movement. He admits that Sebastian is not his real name and that many of his newspaper stories were fictionalized in order to make people furious enough to strike violence. Faye is not deterred from this information, and she has sex with him in a church while many protesters are receiving first aid. This is the moment Faye considers herself born as her own, independent, and formidable woman. However, this elation is overshadowed with her knowledge that she will leave Chicago the next morning in order to accept Henry’s marriage proposal and to save him from fighting overseas.

This highly emotional section is swiped away when Part Eight takes us back to 2011. We see an elderly judge Charles Brown in a wheelchair. He reflects on his sad and tortured life, but relishes the idea that he will soon preside over Faye’s case. Charles is still thirsty for revenge, and his life of being in a wheelchair has only fueled his hatred and blame towards Faye. Samuel visits the judge in an effort to save Faye. Alice has told him everything by now, and Samuel understands the dangers this judge has to offer. Charles does not take this visit well. Samuel leaves in fear and the judge immediately calls up his friends in the department to harass Faye even further. Once Samuel and Faye both realize just how dangerous a vengeful judge will be for her, they make the decision to flee the country. They are stopped by airport security, but it is Samuel who is not allowed to fly. Faye leaves Samuel once again and flies to Norway so she can learn more about her father’s history there. Faye discovered that Frank left behind a pregnant girlfriend during WWII. Her half-sister does not care much for Frank, but she does not seem angry with him either.

The story concludes with Samuel and Faye trying to establish a healthy relationship with one another while Faye makes daily visits to her father’s side. It seems as though the once-shattered family has pieced itself together again. Samuel is living with Bethany, although they do not have a sexual relationship yet; and he feels much more centered now that he has solved his mother’s mysteries. Faye’s memoir was published. It was written by ghostwriters and Samuel put his name on the cover. None of the characters seem to be affected by the book release at all because they are all satisfied in their own recently-mended lives.

More summaries and resources for teaching or studying The Nix.

The Nix from BookRags. (c)2022 BookRags, Inc. All rights reserved.