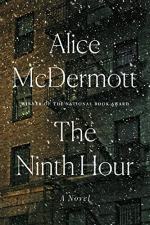 Alice McDermott
This Study Guide consists of approximately 59 pages of chapter summaries, quotes, character analysis, themes, and more - everything you need to sharpen your knowledge of The Ninth Hour.

This detailed literature summary also contains Quotes and a Free Quiz on The Ninth Hour by Alice McDermott.

The following version of this book was used to create this study guide: McDermott, Alice. The Ninth Hour. Farrar, Straus and Giroux, 2017.

Jim asks his pregnant wife, Annie, to run some errands before evening. While she is away, he blocks the front door with a couch and takes his life by asphyxiating on gas. Upon her return, her accompanying neighbor lights a match that sets off an explosion in the house. Police enter the scene and so do the Little Nursing Sisters, Sister St. Saviour and Sister Jeanne. They survey the scene and Sister St. Saviour comforts Annie, who is pregnant. Before Sister St. Saviour dies a few weeks later, Sister St. Saviour makes arrangements for Annie to work with the nuns at their convent in order for her to have financial support. Annie moves in with Mrs. Tierney and her husband, in a chaotic household with several children. During the afternoons, Annie and her daughter Sally visit the Little Nursing Sisters to get away from the noise.

Annie works for Sister Illuminata, the laundress, who teaches her how to clean and instructs her in the precepts of purity. Sally is taken care of by Sister Jeanne, who children love because of her nurturing character. Sister Jeanne teaches children about God's fairness, and that there is restitution for all loss. When Sally becomes a teenager, she begins mimicking the other nuns, and Sister Illuminata thinks she is a born mimic. One day she mischievously asks that Sister Illuminata dress her up in Sister Jeanne's habit, which is considered sacrilege. Sister Illuminata obliges and upon wearing Sister Jeanne's habit, Sally is transformed and realizes she wants to fulfill the vocation of a nun. Her mother, Annie, is opposed to her decision but Sister Illuminata encourages her to give to God what he asks for. Meanwhile, Annie starts a romantic affair with a married man, Mr. Costello, the milkman, whose wife is taken care of by the nuns. Sister Jeanne tells Annie that if she lets Sally go to become a nun with the convent in Chicago, that she might be able to attain forgiveness for her sins.

Sally joins Sister Sally on her daily trips around the neighborhood to assist the elderly and the ill. Sally meets Mrs. Costello, who lost her leg after a dog attack several years ago, and needs the help of the nuns to bathe and dress. Mrs. Costello often complains that she is abandoned and alone. Sally sees her naked body for the first time as she is bathed by Sister Lucy. Sister Lucy thinks that Mrs. Costello is the kind of woman who would have found any excuse to make herself ill, if to keep her husband away from her. During their day out, Sister Lucy comes across a young girl who tells them that their sisters had not been let out of the house that day. When they go and investigate, Sister Lucy finds two sisters tied to a bedpost with tight belts, and the smell of urine in the air. The little girls had been tied to the bed post by their big brother, who is taking care of them while their mother is away working for a wealthy family. Sister Sally urges the sisters to go to the convent if they are ever in danger again, but feels powerless to intervene in their lives, and in the face of the cruelty and power of men.

While Sally's story is developing, the narrative shifts to Mr. and Mrs. Tierney's household and their son Patrick. A first-person narrator is revealed, who is the offspring of Patrick and Sally's union. The first-person narration recounts a story told to them by Patrick, about Red Whelan, who was a substitute for their great grandfather in the Civil War. Red Whelan is missing an arm and a leg from his participation in the war, and Mr. Tierney says that they owe their life to Red Whelan's sacrifice. This story disturbs Patrick, who dislikes the idea of substituting of one life for another. Red Whelan's caretaker, Aunt Rose, moves in with their family and into the Tierney household's attic after Red Whelan's death. Mr. Tierney thinks it's a way to continue repaying red Whelan for his sacrifice.

The plot returns to Sally, who is entering a train to leave for Chicago and become a novitiate. During the train ride, she encounters two women who perturb her. When she learns that Sally is on her way to become a nun, the woman seated next to her tells her that she is running away from her husband, whose penis is too small to pleasure her. She also makes comments on Sally's naivete, and Sally thinks of her as a dirty women. When Sally goes to the dining room, she interacts with a young woman who says she is going to Chicago to find her estranged husband. She begs Sally for money and Sally debates whether she should give her everything she has, as Christ would, or to save what her mother worked so hard to give her. She gives her two tens, but the woman insists for more money. When Sally returns to her seat, she stumbles over the sleeping dirty woman and when she wakes up and becomes startled, Sally punches the woman on her hands and face. When she arrives in Chicago, Sally decides she no longer wants to join the convent.

The narrative shifts again to the first-person narrator, who says that Annie marries Mr. Costello. Sally eventually falls in love with Patrick and they have children. The novel ends years into the future after Sally's long melancholy and eventual death, and as Patrick moves into a smaller apartment. The narrator discovers a headline that reads SUICIDE ENDANGERS OTHERS and learns that Jim, their grandfather, had died by suicide. They also learn that this secret was kept from Sally all her life. The narrator remarks that Sister Jeanne, when they were little children, tells them that she gave up her soul because of her love for her friends.

More summaries and resources for teaching or studying The Ninth Hour.