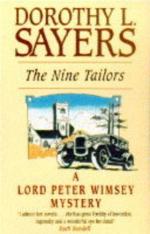 Plot Summary
+Chapters Summary and Analysis
The Bells are Rung Up
The Bells in Their Courses
Mr. Gotobed is Called with a Double
Lord Peter is Called into the Hunt
Lord Peter is Taken from Lead and Makes Third Place
Lord Peter Dodges with Mr. Blundell and Passes Him
Tailor Paul is Called Before with a Single
Monsieur Rozier Hunts the Treble down
Plain Hunting
Lord Peter Follows His Course Bell to Lead
Emily Turns Bunter from Behind
Lord Peter Is Called Wrong
The Quick Work
Nobby Goes in Slow and Comes out Quick
Will Thoday Goes in Quick and Comes out Slow
The Slow Work
The Dodging
The Waters are Called Out
The Waters are Called Home
The Bells are Rung Down
Free Quiz
Characters
Objects/Places
Themes
Style
Quotes
Topics for Discussion
Order our The Nine Tailors: Changes Rung on an Old Theme in Two Short Touches and Two Full Peals Study Guide

Dorothy L. Sayers
This Study Guide consists of approximately 79 pages of chapter summaries, quotes, character analysis, themes, and more - everything you need to sharpen your knowledge of The Nine Tailors.

This detailed literature summary also contains Topics for Discussion and a Free Quiz on The Nine Tailors: Changes Rung on an Old Theme in Two Short Touches and Two Full Peals by Dorothy L. Sayers.

After a disfigured corpse is discovered in the graveyard of Fenchurch St. Paul, Lord Peter Wimsey follows various clues to find the identity of the stranger and how he died, and unravel his link to a jewel theft that took place in the village.

Lord Peter has stayed with the Reverend Venables and helped him with the New Year Peal, so when Lady Thorpe's grave is reopened to reveal a corpse, the vicar calls Lord Peter in. Lord Peter learns of a jewel theft carried out by the thief Cranton and the butler Deacon many years ago, including the fact that a body identified as Deacon's was found after he broke out of prison and vanished. At first, all think that the corpse is Cranton (alias Driver) who disappeared from the village at about the same time as the corpse was put in the grave, which was probably just after New Year's Day.

Acting on a hunch, Wimsey finds a letter sent to a non-existent Paul Taylor that was sent from France. This letter, combined with French underclothing found on the corpse, takes Wimsey to France, where Suzanne LeGros identifies the clothes as having belonged to her missing English husband, but does not recognize Cranton as her husband.

Wimsey continues to investigate how the corpse was killed and the mentally handicapped Potty Peake reveals he saw Will Thoday (who married Deacon's widow) in the church on the critical night, leading Will and his sailor brother Jim to fall under suspicion. Hilary Thorpe sends Wimsey a piece of writing she found in the church, which proves to be a cipher letter that leads to the finding of the emeralds.

The Thoday family vanish and the police start hunting them, and they also find Cranton. Cranton reveals that Deacon had not died after breaking out of prison but had rather escaped to France. When the farm had fallen on hard times, Deacon had tried to return to England to recover the emeralds. After questioning the Thodays, they discover that Will Thoday had met Deacon in the church but could not turn him in, as this would reveal his marriage to Mary to be illegal, so Will Thoday had tied Deacon up in the bellchamber of the church. As Will fell ill, Jim had gone to get Will out of the country and found him dead, and it was Jim who had disfigured the corpse so it would not be recognized, and Jim who buried it. But neither Will or Jim had killed Deacon.

Much later, after a flood strikes the area, leading to the death of Will Thoday, Lord Peter realizes that Deacon had been tied in the bellchamber during the ringing of the nine-hour New Year peal and the vibrations of the bells and their high decibels had killed Deacon.

More summaries and resources for teaching or studying The Nine Tailors: Changes Rung on an Old Theme in Two Short Touches and Two Full Peals.