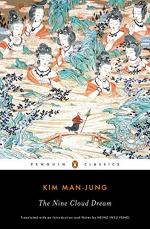 Kim Man-jung
This Study Guide consists of approximately 34 pages of chapter summaries, quotes, character analysis, themes, and more - everything you need to sharpen your knowledge of The Nine Cloud Dreams.

This detailed literature summary also contains Quotes and a Free Quiz on The Nine Cloud Dreams by Kim Man-jung.

The following version of this book was used to create the guide: Kim, Man-Jung. The Nine Cloud Dream. Penguin, 2019.

Kim's novel, which was written in 17th-century Korea, but takes place in Tang Dynasty–era China, is broken up into two sections and a total of 16 chapters, in addition to a translator's introduction and ample notes. The omniscient narrator follows the main character Shao-yu closely, but also narrates events that happen outside of his knowledge and involvement.

The novel begins in a Buddhist monastery on the top of a mountain. Liu-kuan was the master of the monastery, but was getting old, so when it was time to pay respects to the Dragon King, he sent Hsing-chen, his top disciple, in his place. Hsing-chen made the journey, but broke his vows by drinking wine with the Dragon King and flirting with eight fairies who were returning from a visit to Liu-kuan. When Hsing-chen returned to monastery, he questioned his ascetic life and lusted over the fairies he saw. Liu-kuan knew what was happening with Hsing-chen and banished him to the underworld. Hsing-chen and all eight fairies were taken to hell and reincarnated as mortals. Hsing-chen was reborn as Shao-yu, the son of a hermit and a peasant. Shao-yu was an extraordinary young man, handsome and talented at everything. When he was a teenager, he decided to travel to the capital city to take the civil examination. On the way, he met and fell in love with a beautiful woman named Ts'ai-feng, and they promised to marry. When an attempted coup disrupted the town, Shao-yu spent time with a sage on a mountainside and Ts'ai-feng disappeared and was assumed dead. The examination was postponed, so Shao-yu went home for a bit before heading out the following year.

On his way back to the capital, Shao-yu stopped in the town of Lo-yang and attended a party where he won a poetry contest and met a beautiful woman named Chan-yüeh. They fell in love. When he got to the capital, Shao-yu met his aunt Tu, who was the priestess of a temple. She tried to find a proper wife for Shao-yu, and decided that only Ch'iung-pei, the daughter of Minister Cheng would be appropriate. Shao-yu wanted to see her first, which would have been impossible, so they made a plan in which Shao-yu dressed as a priestess to play music for the Chengs. While he was at their house in disguise, Ch'iung-pei realized that he was a man and felt disgraced. Nonetheless, Shao-yu was the top performer on the exam, and so Minister Cheng arranged for his daughter to marry him. To get revenge on Shao-yu for his trick, Ch'iung-pei devised a plan where her servant and close friend Ch'un-yün would pretend to be a ghost and seduce him. It worked, and Shao-yu fell in love with the ghost. When he learned the truth, he still loved Ch'un-yün and decided she would remain his concubine.

After the examination, Shao-yu was awarded a government position. At this time, three kingdoms in the borderlands of the Empire rebelled and declared independence. Shao-yu pacified two of them through diplomacy, and the Emperor sent him to deal with the third. On his way back home, he picked up a boy to be his servant and rekindled his romance with Chan-yüeh. One night he woke up after sleeping with Chan-yüeh and found that she was someone else. It turned out to be Ching-hung, who had been disguised as the boy. He arranged for both to come live with him later as concubines.

The Empress Dowager decided that Shao-yu should marry her daughter, Princess Lan-yang. Shao-yu refused, because he was already engaged to Ch'iung-pei. Eventually the Empress Dowager has him imprisoned. Sometime later, the Tibetans attacked the Empire, and the Emperor released Shao-yu to command an army and fight them off. One night, when Shao-yu's army was surrounded and exhausted, an assassin named Niao-yen snuck into his tent, but rather than kill him, she told him that she is destined to be with him and they made love. Shortly thereafter, Shao-yu was summoned to the underwater palace of Ling-po, the Dragon Princess. She also told him that she was destined to be with him, and they made love. A Dragon Prince was set on marrying Ling-po, and arrived with an army of fish-men to battle Shao-yu, who promptly routed him. The Tibetans surrendered and Shao-yu returned to the capital after three years away. While he was gone, Princess Lan-yang felt guilty about stopping Ch'iung-pei's marriage to Shao-yu, and so the Empress Dowager adopted Ch'iung-pei and she became Princess Ying-yang. Shao-yu married both princesses and, after a prank where the Empress Dowager told him Ch'iung-pei had died, eventually realized who Princess Ying-Yang really was.

Years passed and Shao-yu lived happily with his two wives and six concubines. When he was old and eventually retired, he decided to give up his worldly existence and pursue a spiritual path, and the eight women agreed and vowed to become Buddhist nuns. When he does this, suddenly Hsing-chen awoke on his meditation mat in the monastery. He had experienced Shao-yu's entire life as a dream. Hsing-chen became the master of the monastery, and eventually ascended to paradise with the eight nuns.

More summaries and resources for teaching or studying The Nine Cloud Dreams.