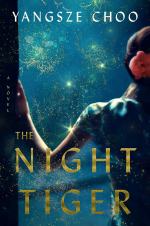 Yangsze Choo
This Study Guide consists of approximately 56 pages of chapter summaries, quotes, character analysis, themes, and more - everything you need to sharpen your knowledge of The Night Tiger.

This detailed literature summary also contains Quotes and a Free Quiz on The Night Tiger by Yangsze Choo.

The following version of this book was used to create this study guide: Choo, Yangsze. The Night Tiger. New York Flatiron Books, 2019.

The first section of the novel begins with a quest: Dr. MacFarlane is on his deathbed and asks his houseboy, Ren, to retrieve his missing finger and bury it with him before the forty-nine days of his soul are over. Ji Lin, an apprenticed dressmaker and dance hall instructor, happens upon the finger by chance from a client. Ren searches his new master's house for the finger, and Ji Lin resolves to return it to the hospital from whence she suspects it came—but it already draws new dangers, and she has a creeping feeling it will change her life. She meets Ren's deceased little brother in her dreams—the same dreams that Ren has, indicating the two are indeed fated to connect.

The second section of the novel delves into the character of Ren's new master, William Acton, a surgeon whose name is also one of the five Confucian virtues. He was an old friend of Dr. MacFarlane's, and though he says he doesn't believe in weretigers, he knows the stories of men who turn into wild beasts and then back again—try as he might to forget them. When he learns his mistress has been mauled by one, he experiences only the beginning of all the troubles yet to come.

The third section of the book features Ji Lin and Ren finally meeting, instantly recognizing each other and realizing they are meant to be in each other's lives. When William accidentally shoots Ren, he gives Ji Lin his master's finger, which he had stolen from the hospital. He asks tells her to put it in his master's grave. Ji Lin is shocked that the same horrifying finger has yet again made its way into her life, but resolves to do what it takes to help Ren.

In the fourth section of the book, she and her step-brother Shin travel to Taiping to return the finger. They succeed in their quest, and declare their love for each other besides. All seems well, but Ji Lin learns in her dreams that Yi is calling Ren to the land of the dead after William accidentally shoots him. She is eager to return to the hospital and check on him.

The fifth section of the book features the unveiling of two villains: Koh Beng and Lydia. Koh Beng had orchestrated a black market of human remains to sell to superstitious locals, and tries to kill Ji Lin for meddling with his affairs. He ends up dying, thanks to Ren and Shin's interference. Lydia confesses to poisoning William's two mistresses and being in love with William, blackmailing him into an engagement, but her plan backfires when the poison she meant to give Ji Lin is drunk by William instead, killing him.

At the end of the novel, Ji Lin quits her job at the dressmaker's and at the dance hall, moving to Singapore with Shin to study medicine. Ren finds another master, just as kind as the last, and also moves to Singapore to study medicine. The three of them will be together in a new city, ready to start a new life and leave the horrors of the past behind.

More summaries and resources for teaching or studying The Night Tiger.