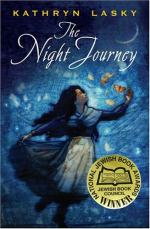 Kathryn Lasky
This Study Guide consists of approximately 42 pages of chapter summaries, quotes, character analysis, themes, and more - everything you need to sharpen your knowledge of The Night Journey.

This detailed literature summary also contains Quotes and a Free Quiz on The Night Journey by Kathryn Lasky.

A young girl learns the story of her ancestors’ escape from Russia first hand in the book “The Night Journey” by Kathryn Lasky. Although Rache is charged with spending time with her great grandmother each day, her parents warn her not to talk to her about the older lady’s past. Nana Sashie insists one day on telling Rache a story of danger, a story that piques Rache’s interest. Rache ends up learning the story of her past, as well as forming a deep bond with her great grandmother.

Relationships between children and the older generations, as well as the importance of one’s past are two significant themes that emerge in the novel. Nana Sashie tells Rache she is beginning to forget her past and the things she’s lived through. This forgetfulness scares her. She entrusts her great granddaughter with the story of her family’s liberation from Russia, a story that Rache doubts even her parents know. Several years after Nana Sashie’s death, Rache writes down the story, as it appears in this novel.

Sashie’s family lived in Russia during the time of the persecution of the Jews. Because Sashie’s father had never been fully discharged from the tsar’s army, the family lived in fear that he will be called back into service for a man who ordered the death and destruction of their fellow Jews. It is in order to keep him from having to serve, or refusing to serve and being killed, that the family made a plan to leave. Rache is surprised to learn that it was her great grandmother who came up with the idea for the family to escape under the cover of the Jewish Purim festival.

Also important in the novel is the family’s samovar, an appliance for making tea that traveled with the family from Russia. Sashie’s mother found creative uses for the parts of the samovar so that her husband would agree to let her take it with them. Later, Rache finds a piece of the samovar in a box of fabric scraps. As a surprise for the family, her father has the samovar refurbished and gives it to the family as a gift. As Nana Sashie and Rache look at the samovar for the first time, it is as if the past and present collide. Nana Sashie is reunited with a piece that holds sweet memories from her childhood while Rache sees, with her own eyes, this appliance she’s heard so much about. Soon after telling her story to Rache, Nana Sashie dies. Her story lives on, however, because Rache hears it, then writes it down.

More summaries and resources for teaching or studying The Night Journey.