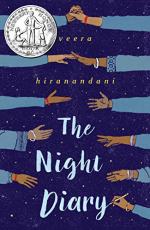 Veera Hiranandani
This Study Guide consists of approximately 45 pages of chapter summaries, quotes, character analysis, themes, and more - everything you need to sharpen your knowledge of The Night Diary.

This detailed literature summary also contains Quotes and a Free Quiz on The Night Diary by Veera Hiranandani.

The following version of this book was used to make the guide: Hiranandani, Veera. The Night Diary. Penguin Random House, 2018.

The Night Diary is an epistolary novel which recounts the partition of India into two separate countries, India and Pakistan, through the eyes of a twelve-year-old half-Hindu and half-Muslim girl named Nisha. Nisha and her twin brother live with their Hindu father, Papa; their grandmother, Dadi; and their cook, Kazi. Their Muslim mother passed away at their birth, and Nisha writes to her mother in the diary which lends this book its title. Nisha’s first entry in her diary begins with a letter on her twelfth birthday and, as the weeks pass, her entries begin to write not only of her personal struggles with shyness but also of her deeper fears of partition in India.

Section 1 includes Nisha’s letters from July 14, 1947 until July 29, 1947. It introduces Nisha and her family and the relationships between them. Amil is Nisha’s twin and has a turbulent relationship with Papa, although Nisha knows that Papa just wants Amil to try harder at school. Both of the children are very close to their cook, Kazi, and both of them experience difficulties fitting in in different ways. The children learn of the political turmoil beginning to affect India and their town, and they face bullying from students who identify them as ‘Hindu’ despite the fact that they are half-Muslim.

Section 2 includes Nisha’s letters from July 30th, 1947 until August 7th, 1947. Nisha and Amil are forbidden from attending school due to the political situation in their town, and are bored at home. They witness a break-in at their house which leaves everyone shaken and Kazi injured. Nisha realizes that everything she thought she knew about her town is changing as people begin to identify themselves based on their ethnic identities. Before long, Papa hosts a party at their house and Nisha enjoys herself thoroughly until she realizes, near the end, that it is a goodbye party and that her life will never be the same again now that Papa has decided to relocate their family.

Section 3 includes Nisha’s letters from August 15th, 1947 until August 20th, 1947. Nisha and her family leave their home in Mirpur Khas by foot, hoping to reach a relative’s house and then go on to a train station to board a train which will take them to the ‘new’ India, since the ‘old’ India has been partitioned into India and Pakistan. Hindus being no longer welcome in Pakistan, the family has no choice but to flee, facing hunger on their journey by foot and, worst of all, dehydration. Nisha fears for her family’s lives as they face tension in Mirpur Khas as well as on the road.

Section 4 includes Nisha’s letters from August 21, 1947 until August 31st, 1947. The family is severely dehydrated, with Amil falling ill and Nisha worrying that he will die. They witness families fight for control over the water pump at a nearby village, so Papa walks on ahead to fetch water from another source as Nisha, Amil, and Dadi stay behind. They experience rainfall for the first time since their journey began and collect the water eagerly, then they continue moving to find shelter from the cold rain. Eventually, they reach the house belonging to Rashid Uncle – Nisha and Amil’s maternal uncle. He treats them kindly, though he cannot speak due to a cleft lip, and Nisha grows attached to him.

Section 5 includes Nisha’s letters from September 1st, 1947 until November 10th, 1947. The children befriend a little girl who lives next door to Rashid Uncle, which puts the family in danger since they are still in Muslim territory. Papa forces them all to relocate again, and they head for the train station. On the train to Jodhpur, their train carriage is attacked, but the family survives. Nisha writes of their new life in Jodhpur, stating that she is shier than ever and feels sad. However, Kazi, their old cook, appears on their doorstep one day, having found the family thanks to a letter Dadi sent him. The family feels whole once more, and this makes Nisha approach her new circumstances with greater optimism. She promises to embrace her new life, though she still cannot understand why neighbor turns against neighbor for reasons of ethnic animosity.

More summaries and resources for teaching or studying The Night Diary.