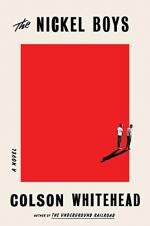 Colson Whitehead
This Study Guide consists of approximately 35 pages of chapter summaries, quotes, character analysis, themes, and more - everything you need to sharpen your knowledge of The Nickel Boys.

This detailed literature summary also contains Quotes and a Free Quiz on The Nickel Boys by Colson Whitehead.

The following version of this book was used to create this study guide: Whitehead, Colson. The Nickel Boys. New York: Doubleday, 2019. Hardcover.

The novel opens in the early 1960s. Elwood Curtis in an African-American boy growing up in Tallahassee, Florida. He is being raised by his grandmother since his parents moved to another state when Elwood was six years old. Elwood is cognizant of racial tensions and divisions in America, and he becomes even more aware of them after his grandmother buys him a record of Martin Luther King speeches. Elwood begins attending civil rights protests in his teenage years. Elwood is studious and hard-working, and he aspires to attend college. One day, when Elwood is about sixteen years old, he is unjustly targeted by a white police officer. The officer falsely charges Elwood with stealing a car. Elwood is convicted and sentenced to attend Nickel Reformatory School for a year. Nickel is an all-boys reform school that is segregated by race.

After Elwood arrives at the school, he is dismayed to see that the class offerings are virtually nonexistent. The students are forced to spend most of their time performing unpaid labor that generates profit for the school and the state. Elwood also soon learns that the staff often beat students, which is illegal, and they sometimes even kill students. Early in Elwood’s time at Nickel, the staff beat Elwood quite severely after he tries to protect a student who is being bullied. Elwood befriends another black student there, who is named Jack Turner (but he is simply called Turner by other people.) Elwood tries to shorten his time at Nickel by being docile and subservient, but the staff seem to administer punishments almost at random.

One day, the school holds its annual boxing match, in which a black student must box against a white student. This year, black boxer is a boy named Griff, who is strong, unintelligent, and who often bullies others. The school superintendent, Maynard Spencer, privately tells Griff to lose the match on purpose. However, Griff wins the match when he accidentally knocks out the other boxer. The black students are excited by Griff’s victory. At the order of Superintendent Spencer, some of the staff members take Griff behind the school and kill him. One day, when state inspectors arrive at Nickel, Elwood writes a report of what he has witnessed and experienced at Nickel. Turner helps Elwood covertly give the report to the state inspectors. However, the state takes no action against the school.

In retaliation for the report, Spencer and the school staff plan to kill Elwood. Elwood and Turner decide to try to escape together. Turner successfully escapes, but staff members catch up with Elwood and shoot him to death. Turner adopts Elwood’s name as a way of honoring him. Turner eventually moves to New York City and establishes a moving company there. He does not talk about his time at Nickel, and he attempts to simply repress those memories. However, he suffers persistent emotional trauma. Eventually, in the 2010s, archaeologists discover human remains on the grounds of the now defunct Nickel school. The remains have evidential marks of the violence suffered by the students. As the truth about Nickel begins to become public, Turner decides to finally speak publicly about the things he experienced while at Nickel.

More summaries and resources for teaching or studying The Nickel Boys.