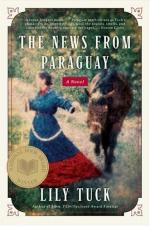 Lily Tuck
This Study Guide consists of approximately 33 pages of chapter summaries, quotes, character analysis, themes, and more - everything you need to sharpen your knowledge of The News from Paraguay.

The News from Paraguay Summary & Study Guide includes comprehensive information and analysis to help you understand the book. This study guide contains the following sections:

This detailed literature summary also contains Topics for Discussion and a Free Quiz on The News from Paraguay by Lily Tuck.

When Ella, a divorcee living in Paris, meets Franco, the heir to the Paraguayan throne, there is instant chemistry. When Franco returns with his new mistress to his native land, though, he finds enemies even in his own family. As he takes power, Franco's arrogance threatens to tear the country apart. He quickly finds himself in a war against three other nations, which he vows to fight to the end. Ella is forced to choose between Franco and her children.

Ella Lynch is an aspiring socialite in Paris in the mid-1800s who is looking for someone to "fix" her money problems. She becomes infatuated with Francisco Solano Lopez, the heir to the presidency of Paraguay. He is suave and an excellent lover, and Ella makes plans to follow him back to his home country.

Ella and Franco depart for Buenos Ayres by boat, along with her maid, Spanish instructor and favorite horse. The voyage leaves many of them seasick. Franco is returning to his father, the president, along with his brothers and sisters, who he despises. Ella finds out mid-voyage that she is pregnant.

Ella stays in Buenos Ayres while Franco goes on ahead to Asuncion. Ella acquires the services of an American doctor, Henry Kennedy. Juan Francisco is born healthy and given a wet nurse named Rosaria. The entire group sets out for Paraguay, first by steamer and then overland. Ella's maid hurts her arm badly and dies en route.

Ella loves Asuncion, but she hates her sisters-in-law. They don't want her to assume an official position, since she isn't married to Franco. The episode is further complicated when the bishop refuses to baptize Juan Francisco, nicknamed Pancho. Both Ella and Franco blame Franco's family.

After Ella and Franco lose their second child, Ella begins work on her palace, called Obispo Cue. It is to be grand and pink. She gives birth to four more sons in the following years: Enrique Venancio, Federico, Carlos Honorio and Leopoldo Antonio. In that same year, Franco's father dies, and Franco officially takes power over the country.

Franco takes revenge on the people who he perceives embarrassed him regarding his first son's baptism. He puts his brother Benigno on trial and has him exiled to a remote house. He also makes plans for a political marriage, but he is snubbed by the Emperor of Brazil. Dr. Kennedy dies on an expedition to a remote lake.

Franco consolidates his absolute hold on power. He also starts preparing for war, massing troops on his border for an attack on Argentina or Brazil. His oldest son, Pancho, is already starting to show some of his father's sadistic tendencies. He buries one of his brothers in the garden up to his neck.

Franco attacks Brazil without warning, which draws the ire of the United States minister. His troops overwhelm and capture an important Brazilian province. Franco also attacks to the south and takes the Argentine fortifications at Humaita. Suddenly, Paraguay is at war with three separate nations, all of which sign a treaty against Paraguay.

Ella arrives at Humaita, sees the odds stacked against Franco and for the first time considers fleeing to France with her children. Franco has a suburb defensive position at the fort, but he squanders it by going on the attack and losing many troops. Ella gives birth to another child, but he dies shortly after birth. Franco meets with an Allied general to discuss truce terms but walks out when he is told that his resignation is part of the deal.

Franco's commander in chief, General Diaz, scores a victory just south of Humaita, and Franco watches the battle through his field glasses. After celebrating with Franco, Diaz becomes very overconfident and is wounded by one of his own torpedoes. He dies shortly thereafter.

Franco's army is outnumbered more than two to one, and most of his troops are old men and boys. Ella resorts to stealing jewelry from a sacred statue in a small village. Franco starts a tactical retreat, taking his men through a treacherous swamp in the process. He then sets up a new headquarters at the hilltop town of San Fernando. He has his brothers and his brother-in-law arrested for treason, tortured and killed. He also has his sisters publicly flogged.

The residents of Asuncion panic when Brazilian ships approach. Many flee the city. Ella evacuates with the children to join Franco, who retreats once again and barely escapes as many more of his troops die to protect him. His once proud army is reduced to barely one thousand troops.

Ella relocates to the quiet town of Piribebuy. The Brazilians overrun and brutalize Asuncion. When they make it to Piribebuy, she flees yet again. Many others in the town are captured or killed. Franco joins his family with the last of his troops. The family wakes to find themselves abandoned by the remaining soldiers. Franco has his family leave and rides off, with the Brazilians close behind. He becomes mired in the mud and is killed on the banks of the Aquidaban River. Ella is apprehended shortly thereafter and Pancho is killed while defending his mother. Ella is brought back to the site of Franco's death. She helps drag the body to shore and bury it. Then, she and her remaining sons are finally allowed to leave.

Ella and her sons travel to Paris, and finding war with Prussia imminent, they go on to England. Ella uses much of her money to put her kids in school. The man she sent material to "just in case" suddenly refuses to help her. She returns to Paris after the war. Two of her sons return to Paraguay several years later to try and reclaim the family land, but they are ordered to leave. Ella becomes confused in her old age and looks in the streets of Paris for people from her past who are long since dead. She looks especially for Franco, but she never does find him.

The News from Paraguay from BookRags. (c)2022 BookRags, Inc. All rights reserved.