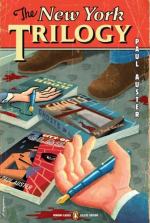 Paul Auster
This Study Guide consists of approximately 35 pages of chapter summaries, quotes, character analysis, themes, and more - everything you need to sharpen your knowledge of The New York Trilogy.

The Stillman apartment is located on East 69th Street in New York City.

The Height Luncheonette is located across from Quinn's apartment and is a place where he frequently eats.

The Columbia library is in New York City and is where Quinn Goes to read Stillman's book.

Brooklyn Heights is the site of the apartment that White rented for Blue. Black lives across the street.

The Algonquin Hotel is located in Manhattan.

Chelsea is the area of New York City where Sophie Fanshawe lives.

Riverside Drive, in New York City, is the street that the apartment of Sophie and Ben is...

More summaries and resources for teaching or studying The New York Trilogy.