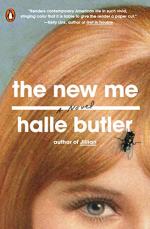 The New Me Summary & Study Guide

Halle Butler
This Study Guide consists of approximately 47 pages of chapter summaries, quotes, character analysis, themes, and more - everything you need to sharpen your knowledge of The New Me.

The New Me Summary & Study Guide includes comprehensive information and analysis to help you understand the book. This study guide contains the following sections:

This detailed literature summary also contains Quotes and a Free Quiz on The New Me by Halle Butler.

The following version of this book was used to create this study guide: Butler, Halle. The New Me. New York: Penguin Books, 2019.

The novel opens with the 30-year-old narrator Millie sitting at her desk at her latest temp job, working as a receptionist for an interior design firm called Lisa Hopper. Millie finds the job and her co-workers dull. She leaves for the day and returns home to watch an episode of the crime show Forensic Files on her laptop, alone. This exact pattern is repeated the next day. Meanwhile, the third person narrator notes that Millie's supervisor Karen thinks she is a lousy employee, and begins formulating a plan to have her fired.

Millie reflects on her loneliness, which has become heightened since her break-up with her ex-boyfriend James. The only person in Millie's life is her friend Sarah. She meets Sarah for a drink, and the two both complain about their jobs while drinking too much. Millie returns to work the next day hungover, and Karen gives her some documents to shred, a task that Millie takes up with half-hearted enthusiasm. Karen begins planning to find a replacement for Millie. At the end of the day, Millie returns home and turns on Forensic Files.

Back at Lisa Hopper the next day, Millie shreds more documents and overhears a co-worker's boring conversation about adopting a new dog. The third person narrator then interjects moments from two of Millie's co-workers' lives—the woman still thinking about her new dog, and another sitting at home eating snacks while smoking marijuana. Millie goes to a party with Sarah. Sarah is rude to Millie all evening, and Millie's attempts to enter into conversation with others go poorly. She recalls quarreling with James after she made disparaging remarks to one of his friends, and decides that she is probably better off being alone. Karen sends an email to Julia, Millie's boss at the temp agency.

Millie is given more documents to shred by Karen. She receives an email from Julia, asking for an update about her experience thus far at Lisa Hopper. Millie believes that this email may be an indication that she is going to be given a permanent position at the design firm, and she is overwhelmed by her emotions. The thought of working full-time at an office is depressing to Millie, but she also thinks she could use this as an opportunity to reinvent her life. She goes to the restroom and cries.

After work, Millie makes a list of all the things she wants to change about her life, and talks to her mother on the phone. During the conversation, Millie's mother insinuates that this is a good opportunity for her to become more financially independent. Millie cleans her apartment, places an order for fancy groceries, and texts an old college friend. Meanwhile, Karen notices that Millie still has not finished shredding the documents she gave her, and sends another email to Julia. That night, Millie continues to clean her apartment and invites Sarah over. She attempts to steer their interaction away from the usual binge drinking and complaining, but fails. The next morning, Millie wakes up hungover and goes for a walk in the park. She is asked to leave by a woman from park security, who believes Millie is drunk because she is staggering around.

Back at the office, Karen meets with Lisa Hopper, the firm's CEO, and tells her about Millie's poor performance, and about the idea she has for an internship program. Lisa is dismissive, and when Karen leaves, she laughs about the internship idea with a co-worker. Millie wakes up early the next morning and goes for a run, putting her new life plans into place. She goes to work, and when she leaves, she listens to a voicemail from Julia. When she returns her call, Julia tells Millie that Lisa Hopper is letting her go, and that she can email the temp agency about another placement. Millie sends the email, but receives no response for weeks. During that time, she falls into a serious depression.

Millie sends an email to Julia asking what she did wrong at Lisa Hopper, and Julia replies that there were complaints about Millie's performance and her personal hygiene, and that she will not be receiving anymore placements from the agency. Millie's mother calls to invite her home to St. Louis for a visit. Depressed and anxious, Millie boards a train immediately. In St. Louis, Millie's parents are supportive and caring. Her mother buys her new clothes, and both parents assure her they are not worried about her and everything will work out.

Back in Chicago, Millie is hired by a call center selling tickets to the ballet. However, her supervisor is exceedingly harsh, and even pulls Millie's hair when Millie is not aggressive enough on the phone. She quits immediately. She then invites Sarah over, and the two fall back into their old pattern of complaining about work. Millie becomes so irate at Sarah's lack of sympathy for her, she nearly throws her out of her apartment, but loses her nerve. Months pass.

In the epilogue, the third person narrator explains that Millie now has a full-time position as a Junior Office Manager. Millie is regarded as a “cautionary tale” (189) by her younger co-worker Alyssa, who hopes to go to graduate school rather than spend her life working in an office.

More summaries and resources for teaching or studying The New Me.

The New Me from BookRags. (c)2022 BookRags, Inc. All rights reserved.