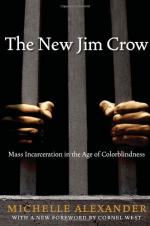 Michelle Alexander and Michelle McCool
This Study Guide consists of approximately 27 pages of chapter summaries, quotes, character analysis, themes, and more - everything you need to sharpen your knowledge of The New Jim Crow.

This detailed literature summary also contains Topics for Discussion on The New Jim Crow by Michelle Alexander and Michelle McCool.

"The New Jim Crow" highlights the racial dimensions of the War on Drugs. It argues that federal drug policy unfairly targets communities of color, keeping millions of young, black men in a cycle of poverty and behind bars.

The book begins by disproving claims that racism is dead. Those who believe that full equality been achieved would do well to notice many African Americans' reality today. An extraordinary amount of blacks are still barred from voting because in nearly every state, as convicted felons cannot vote. Hundreds of thousands of African Americans have served time in prison as a result of drug convictions and are branded felons for life. Voting is also barred for those currently incarcerated. Alexander uncovers the system of mass incarceration: a system comprised of laws, rules, policies, and customs that control criminals both in and out of prison. The greatest instigator of mass incarceration is the War on Drugs. Rather than combat drug activity, the War on Drugs has served as a deliberate strategy to control people of color and remove them from the political process, which is racist in both application and design. Alexander suggests that the War on Drugs and mass incarceration constitute a "rebirth of caste" in America. Beginning with slavery and continuing with Jim Crow segregation, mass incarceration prevents places entire groups of people into discriminatory positions in society, permanently.

The War on Drugs began in earnest in the mid-1980s, equipping local law enforcement agencies with the means to increase crackdowns on communities in search of drugs. Alexander notices, however, that many of the policies implemented by the War on Drugs usurps the U.S. Constitution and are specifically targeted at communities of color. The "stop-and-frisk" rule, for example, grants police officers the ability to search individuals based on "suspicion", not probable cause, of drug activity. This opens the floodgates for discriminatory practices. Police can find an individual "suspicious" based on dress, walk, driving ability, and as Alexander points out, skin color. This supports statistic that nearly 90 percent of drug felons are black, when whites are more likely to engage in drug activity. Polices that punish crack cocaine more harshly than powdered cocaine (blacks being associated with crack) serve as a reminder of the discriminatory approaches to drug crime. Alexander provides numerous statistics that suggest that poor black men are on the whole, stopped more often by police, arrested more often, and imprisoned more often than white offenders.

The lives of convicted felons after they are released from prison are forever changed. As a result of their criminality, they are legally discriminated against in their ability to obtain housing, employment, education, and public benefits like Medicaid and food stamps. Convicted felons are prevented from voting until they pay exorbitant fines and penalties, many of which they can never fully pay. Ex-offenders are shamed in their communities, and often live in isolation and despair. Many return to crime and are re-incarcerated. Here, Alexander draws parallels between mass incarceration today and past systems of racialized social control like Jim Crow. Both systems legally discriminated against citizens and were formed by the racist views of those in power. The book ends with a simple question: how best should the public respond to a social crisis of this magnitude? Alexander is skeptical of legal-driven, trickle down theories of social change. Such approaches reform aspects of the system, but don't address the root of the problem. She suggests that in addition to bringing an end to the War on Drugs and the system that has developed around it (which will be no simple feat), the public consensus that "being a criminal equals being black" must to be challenged and changed. In addition, "colorblindness" and its indifference to the specific problems faced by racial groups needs to be exposed. Talking about race must once again become honest and transparent. Ending mass incarceration will require a grassroots movement of people, white and black, criminal and non-criminal, demanding peace and prosperity for all.

More summaries and resources for teaching or studying The New Jim Crow.