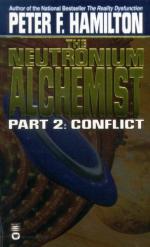 Peter F. Hamilton
This Study Guide consists of approximately 157 pages of chapter summaries, quotes, character analysis, themes, and more - everything you need to sharpen your knowledge of The Neutronium Alchemist Conflict.

This detailed literature summary also contains Topics for Discussion and a Free Quiz on The Neutronium Alchemist Conflict by Peter F. Hamilton.

The Neutronium Alchemist: Conflict is the fourth book of a six-part science fiction series by Peter F. Hamilton. Ths was originally released as three longer books in the U.K. The series tells the story of the terrible effects of souls returning from the dead to possess the bodies of the living. This book explores the conflicts that arise from this situation, as well as the new alliances that must be forged in order to combat the threat. The main storyline of the book revolves around the attempt to capture a scientist called Mzu, who has invented a powerful super-weapon that she intends to use for her own revenge. Joshua, Monica and Samuel must stop her and neutralize the threat of the weapon before it falls into the hands of the possessed. Meanwhile, many other characters' side plots are followed as they cope with the effects on their own lives of the conflict between living and possessed.

The Confederation is a loose alliance of all the planets that mankind has colonized, including their very different and often opposing governments. These are roughly split into the Adamists, who live on planets and asteroids, and the Edenists, who can link minds with each other and dwell in living habitats. There are also exceptions, such as the independent habitats of Tranquillity and Valisk. There are also several alien races with whom the humans are in contact, of which the Kiint and the Tyrathca are mentioned in this book. As the book opens, the Confederation are at war with Capone's Organization of the possessed, and various other planets have been invaded or taken over. As the story develops, the various factions within the Confederation finally begin to put aside their differences in order to fight their mutual enemy. The Confederation Navy, the Kulu Kingdom, Tranquillity, and the Edenists begin a joint effort to liberate Ombey, one of the Kulu worlds, from the possessed. On Ombey, Stephanie and a group of other possessed adults gather all the living children they can find and bring them to safety. The Confederation also plans to ambush Capone, using Tranquillity as a base. Unfortunately, Capone is aware of the ambush, and plans an attack of his own against Tranquillity.

Joshua, Monica and Samuel are all searching for Mzu. They have tracked her as far as the asteroid Ayacucho, but due to their own suspicions of each other and the interference of the possessed, she manages to slip away. They follow her to the planet Nyvan, but Capone and his possessed followers have also managed to find her. As Joshua and the various agencies desperately try to stop the possessed from capturing or killing Mzu, they find that they must now work together in order to survive. Trapped inside a foundry shed as the possessed close in on them, they manage to escape in a torrent of water. After climbing out, Joshua's ship blasts the shed and his spaceplane lands to collect everyone. The whole group manage to escape before a huge ironberg, sent by the possessed, falls on the planet. Joshua flies them all to the coordinates of the Alchemist super-weapon but Capone's possessed arrive shortly after. They are forced to fire the weapon into a gas giant, causing it to erupt in a massive nuclear explosion that destroys Capone's ships. Finally safe, Joshua returns Mzu to Tranquillity only to find that the habitat has vanished. It does not appear to have been blown up, but the possessed have the power to remove whole planets from the universe, and Joshua and his team fear the worst.

Elsewhere in the galaxy, Louise, her sister Genevieve, and their possessed companion Fletcher, manage to make it to Earth's asteroid halo. Fletcher plans to try to stop the evil Quinn Dexter from destroying Earth, but they are stopped and arrested by Earth's security. Meanwhile, Quinn Dexter blows up one of Nyvan's asteroids, knowing that the fragments with rain down on the planet, causing destruction and clogging up its atmosphere. He plans to cause similar chaos and suffering on Earth. Unlike Fletcher, he succeeds in passing through the security checks and makes it to Earth.

As Syrinx searches for answers about death and the beyond, Erick Thakrar is forced to fight the possessed over and over as he attempts to take vital information to the Confederation. When Erick meets Syrinx he is a broken man, and begs to be put into zero-tau. Syrinx flies to Tranquillity to help prepare for the ambush of Capone, but is caught there when the Organization attacks.

The Deadnight kids from Koblat and Gerald Skibbow, who is trying to save his daughter from possession, finally manage to get passage to Valisk, but when they arrive the habitat has vanished. The hellhawk ship they are travelling in decides to fly them to Capone instead, which ironically will actually bring Gerald closer to his daughter. On Valisk, Rubra finally succeeds in persuading Dariat to join himself with the habitat personality. This gives them the power to remove the habitat from the universe to a place that the possessed will not be able to remain in their stolen bodies.

As each character suffers at the hands of the possessed, they attempt to come to terms with what the beyond means for them. For many, the prospect of eternal suffering in the beyond, that can only be relieved by possession of the living, is too much to bear. As humanity fights the possessed on all fronts, they are forced to ask themselves the question of why fight an enemy that you will become?

More summaries and resources for teaching or studying The Neutronium Alchemist Conflict.