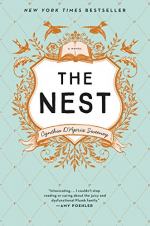 Get The Nest from Amazon.com
View the Study Pack
Study Guide
Order our The Nest Study Guide

Cynthia D'Aprix Sweeney
This Study Guide consists of approximately 92 pages of chapter summaries, quotes, character analysis, themes, and more - everything you need to sharpen your knowledge of The Nest.

The Nest Summary & Study Guide includes comprehensive information and analysis to help you understand the book. This study guide contains the following sections:

This detailed literature summary also contains Quotes and a Free Quiz on The Nest by Cynthia D'Aprix Sweeney .

The novel The Nest by Cynthia D’Aprix Sweeney demonstrates how the lives of others can spin out of control as the result of one person’s mistake. All of Leo Plumb’s siblings suffer after he crashed his car severely injuring a young waitress he had just seduced. Much of Leo's sibling's anger came when they learned their mother had cashed out a good deal of her children’s trust fund, left to them by their father, to pay for and cover up Leo’s accident. The novel addresses the idea that one shouldn’t count on a financial payout before they actually have it in their hands. Other themes include family relationships, the lengths to which some will go to keep up appearances, and the struggle to find one’s identity.

The grown Plumb siblings that had been counting on their inheritance payout to help them get out of the financial jams they had gotten themselves into were most enraged when they learned their mother withdrew almost all of the inheritance fund their father had left for them in order to pay for the wreck Leo had when he was drunk and high. Leo’s sister, Melody, had been counting on the money from her inheritance not only to help her pay down the mortgage on her family’s house but also to fund her daughters’ college educations. A brother, Jack, needed the money to pay off a home equity loan he took out against he and his husband’s summer home. Leo’s second sister, Bea, was most frustrated because she had always considered Leo to be her mentor. She wanted him to return to being the big brother she remembered. The siblings arranged a lunch meeting with Leo to confront him about the money he owed them. Leo made a promise to his three siblings that he would meet with them in three months with a solid plan to pay them back.

Having no one else who would take him in, Leo called on Stephanie, an old girlfriend and fellow employee in the literary world, who agreed to let him live there even though she had her doubts about his intentions. The two soon reignited their old relationship. Meanwhile, Jack made an interesting discovery when he tried to visit Leo one day at Stephanie’s apartment. He learned the man who lived in Stephanie’s basement apartment, named Tommy, took a Rodin statue from the wreckage of the World Trade Center. Tommy believed the statue was a sign from his wife who was killed in the attack and Tommy had kept it hidden in his apartment ever since. Jack tried to broker a sale of the statue believing he could use the commission he would make to relieve his financial situation.

After Leo first made the promise to his brother and sisters that he would find a way to repay them their money he seemed intent on finding a new job in the online magazine business, but he was soon discouraged when Nathan Chowdhury refused to hire him. To make matters worse Leo's sister Bea showed him a story she had written about his wreck. When Leo told Stephanie about the story she didn’t seem to understand why Leo was so upset.

Leo decided to flee the United States and live on a secret bank account he had hidden away in the Cayman Islands. Even though he had enough in the account to pay his siblings back, he chose not to do so.

It was at Melody’s fortieth birthday party that the entire family learned from Stephanie that Leo was gone and that Stephanie was pregnant with his baby. When they tried to track down the last time any of them actually saw Leo, Jack and his husband, Walker, began to fight because Jack had been telling Walker that he was meeting with Leo when he was actually meeting with Tommy to discuss the sale of the Rodin statue. Walker told Jack his plan to sell the statue is both illegal and unethical, and then walked out on him. Melody’s future didn’t look much brighter as she and her family were forced to sell their home. She was also in shock because she learned that one of her daughters is gay.

Meanwhile, Bea and her boss, Paul Underwood, tried to locate Leo. Leo had been a mentor to Bea when she was a young writer. She wanted to prove to herself that the Leo she admired so much really existed. During their ten days in the Caribbean Bea and Paul formed a bond and realize they loved one another. Although both of them saw Leo just as they were about to board a ferry to go back to the United States, they both pretended they didn't see him. Melody’s life began to look up when she realized that even though she had to sell her house, she still had her family, the most important thing that came from the home. In conclusion, Stephanie’s baby serves as a means to unite the family. They could see Leo in the little girl’s expressions. Jack learned to be a father to the girl and Bea began writing again.

More summaries and resources for teaching or studying The Nest .

The Nest from BookRags. (c)2022 BookRags, Inc. All rights reserved.