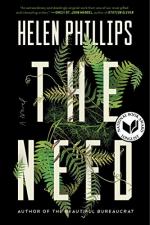 Get The Need from Amazon.com
View the Study Pack
Study Guide
Order our The Need Study Guide

Phillips, Helen
This Study Guide consists of approximately 33 pages of chapter summaries, quotes, character analysis, themes, and more - everything you need to sharpen your knowledge of The Need.

The Need Summary & Study Guide includes comprehensive information and analysis to help you understand the book. This study guide contains the following sections:

This detailed literature summary also contains Quotes and a Free Quiz on The Need by Phillips, Helen.

The following version of this book was used to create this study guide: Phillips, Helen. The Need. New York: Simon and Schuster, 2019.

The novel is set in an unnamed town. The protagonist is a woman named Molly. She has a husband and two young children, and she works as a paleobiologist. Her husband, David, is a musician, and he often goes out of town for work. Her children are four-year-old daughter Viv and infant son Ben. One day, while digging at a site fairly close to her house, Molly discovers some century-old artifacts, including a Bible that uses female pronouns for God. Molly and her colleagues—Corey and Roz—begin charging an entrance fee for people who want to see the Bible. The Bible quickly becomes a popular attraction.

One night, when David is out of town, a person wearing a mask breaks into Molly’s house. Fearing for her children’s safety, Molly agrees to go with the masked figure to a different location. When they are away from the house, the figure removes the mask and reveals that it is a woman who looks identical to Molly. The woman says that her name is also Molly but that Molly can call her Moll. Moll says that she is from a parallel universe in which a suicide bomber recently came to see the Bible; the blast from the bomb killed Ben and Viv. Moll says that she came to Molly’s universe via a portal at the dig site, and that she wants to help raise Molly’s children.

The next day, Molly leaves the house with Viv and Ben and takes them to a random spot in town. However, she eventually has to return home to change Ben’s diaper. Moll soon arrives at the house. Molly fears that the children will be traumatized if they suddenly see an exact double of their mother. Molly agrees to hide in the basement while Moll takes care of Viv and Ben that day. During the following days, Moll and Molly take turns mothering the children. Molly worries that Moll will eventually harm the children or take them away, or that she will harm Molly.

However, Moll rarely shows hostility, if ever. One day, David returns home for a short time between business trips. Moll has sex with him, and Molly briefly witnesses the act. Molly notices that Moll’s facial expression appears to be quite sad. Eventually, Moll decides that she must return to her own universe and begin the process of healing form her loss and grief. At around the same time, Viv and Ben become very sick. Molly calls a doctor, who says that it is not serious. Molly takes care of the children, who feel mostly better in the morning. After the children recover and Moll returns to her own universe, Molly feels a renewed sense of confidence in her ability to be a good parent.

More summaries and resources for teaching or studying The Need .

The Need from BookRags. (c)2022 BookRags, Inc. All rights reserved.