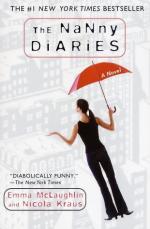 Nicola Kraus
This Study Guide consists of approximately 28 pages of chapter summaries, quotes, character analysis, themes, and more - everything you need to sharpen your knowledge of The Nanny Diaries.

Alex is a classmate of Grayer. They have a play date in chapter 2, but it does not go well.

Alexis is the volunteer receptionist at the Parents League, where Nanny posts her ad for a nanny position.

Allison, the adopted Chinese daughter of a gay couple, is a girl from Grayer's class who comes over around Christmas for play date.

Blond, Australian Caitlin is the nanny that Nanny is hired to replace. Grayer was attached to Caitlin, who worked for the Xes for some time. Mrs. X fires Caitlin because she wants too much vacation time. Nanny learns from another nanny that Caitlin was trying to save money to visit her seriously ill sister at home.

Charlene is Nanny's roommate. Charlene works as an airline stewardess and is often away from home.

The Nanny Diaries was...

More summaries and resources for teaching or studying The Nanny Diaries.