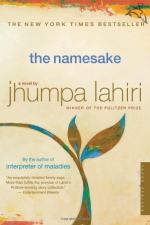 Jhumpa Lahiri
This Study Guide consists of approximately 41 pages of chapter summaries, quotes, character analysis, themes, and more - everything you need to sharpen your knowledge of The Namesake.

The Namesake Summary & Study Guide includes comprehensive information and analysis to help you understand the book. This study guide contains the following sections:

This detailed literature summary also contains Topics for Discussion and a Free Quiz on The Namesake by Jhumpa Lahiri.

The Namesake is a novel by Pulitzer Prize winning author Jhumpa Lahiri. The novel follows the life of Gogol Ganguli from birth until middle age, chronicling his struggle to discover who he is as a second-generation immigrant. Gogol struggles, first with his unusual name and later with the traditions his parents insist on upholding that embarrass Gogol in front of his American friends. However, as Gogol grows older, he comes to appreciate what his parents went through when moving to this country and how hard it was for them to adapt to their adopted country. Gogol eventually finds some solid ground between his parents and the world they live in, bringing him some peace. The Namesake is a novel of self-discovery that is an emotional journey its readers will not soon forget.

When Ashima Ganguli becomes pregnant with her first child she has only lived in America for a short time and is still getting used to the unusual culture. Ashima's marriage is an arranged one and therefore is lacking in the strong emotions of an American marriage, leaving Ashima feeling isolated when she goes into labor. Ashima would have been surrounded by family members if she had been still in Calcutta, but in America, she is left to labor alone. Ashima gives birth to a little boy while her husband waits in the waiting room, thinking about his life thus far and the train accident that nearly took his life a few short years before. It is the memory of this train accident that comes back to Ashoke when the hospital insists Ashima and Ashoke name their baby before taking him from the hospital.

In Calcutta, it is traditional for a new baby to be called by a nickname until a good name can be chosen. Ashima and Ashoke have given the right to name their child to Ashima's grandmother. The name has been sent in a letter, but has not yet arrived by the time Ashima and the baby are ready to leave the hospital. Under pressure to give the child a name, Ashoke decides on Gogol, the name of a Russian author he admired and the author of the book he credits with saving his life the night of the train wreck. This will remain Gogol's legal name until the grandmother's letter arrives and they are able to give their child a proper name. However, the letter becomes lost in the mail and Ashima and Ashoke will never learn the name Ashima's grandmother chose for their child.

When Gogol is old enough to enter school, Ashoke picks a proper name for his son, Nikhil, and instructs the school to use this more formal name. However, the school principal becomes aware of Gogol's reluctance to respond to this name and refuses to allow him to be addressed by any name other than his legal name, Gogol. The issue of Gogol's proper name as opposed to his nickname is forgotten. However, Gogol grows to dislike his name. In an English class, Gogol learns of his namesake's complicated life and becomes embarrassed to be linked to such a man. Gogol resolves to rid himself of his name, taking steps once he turns eighteen to have his name legally changed to Nikhil. At first, Gogol is pleased with his name change, and is excited to hear himself addressed by this more Americanized name. However, when Gogol's father tells him about the train wreck that led to his name, Gogol feels guilty for shunning his father's first gift to him.

Away at college, Gogol experiences freedom for the first time. Gogol meets his first girlfriend, an American of whom his parents disapprove. Gogol also picks a career as an architect, despite his father's hopes he will follow him into engineering. When it comes time to pick a graduate program, Gogol elects to move to New York rather than accept a program close to his parents in Cambridge. Gogol embraces American culture, falling in love again with a young lady whose family is so normal, so American, that he is embarrassed to take his girlfriend home to see how different his own parents are. Gogol wants to be American, wants to embrace all that is American. However, when Gogol's father dies suddenly, he finds himself filled with shame for turning his back on his family. Gogol breaks up with his girlfriend and does all he can to help his mother and sister through this difficult time.

When Gogol's mother suggests that he meet with the child of a family friend, Gogol resists at first, aware that his mother is attempting to get him to settle down with a good Indian girl. However, the girl turns out to be someone with whom he has a great deal in common. Within a year, Gogol is married to this girl, settling down to make a life. However, the marriage starts on the wrong foot and it is not long before trouble begins to separate them. Gogol's wife has an affair, and they divorce before the marriage is two years old. This divorce is devastating for Gogol, but it brings him back home to where he begins to find the common ground between the world his parents came from and the world in which he lives. Gogol finds peace with himself and his name, accepting once and for all who he is.

More summaries and resources for teaching or studying The Namesake.

The Namesake from BookRags. (c)2022 BookRags, Inc. All rights reserved.