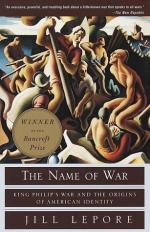 The Name of War: King Philip's War and the Origins of American Identity Summary & Study Guide

The Name of War: King Philip's War and the Origins of American Identity Summary & Study Guide includes comprehensive information and analysis to help you understand the book. This study guide contains the following sections:

This detailed literature summary also contains Topics for Discussion and a Free Quiz on The Name of War: King Philip's War and the Origins of American Identity by Jill Lepore.

The most brutal war in American history is one about which most Americans have never heard, but King Philip's War was among the most destructive war in terms of lives lost and blood spilled per person that the United States has ever seen. Sometimes named Metacom's War or Metacom's Rebellion, King Philip's War was a series of battles between Native American tribes that inhabited southern New England (mostly Algonquian) and the English colonists and their Native American allies between 1675 and 1676. "King Philip" is actually the English name of the Indian chief who is said to have started the war, Metacomet or Metacom. He was the second son of Massasoit, the famous Indian chief who welcomed the English to Massachusetts some forty years before. The casualties of the war were significant: 1.5% of English colonists died (800 out of 52000) and 15% of Native Americans in the area (3000 out of 20000) lost their lives as a result of the conflict.

The causes of the conflict are complex, as is the case in most wars. Jill Lepore, the author of The Name of War: King Philip's War and The Origins of American Identity, argues that the root cause was a struggle for cultural identity. The English colonists were committed Christians and were intent on converting as many Indians to Christianity as possible. Indians who converted often moved to "praying towns" where Christian Indians would often conform to English culture as a result of their new religion.

The Indians were caught off guard by such unheard of and aggressive attempts at conversion. The English also gradually encroached on the native lands of the Indians, since they believed the Indians did not truly own the land because they did not develop it. Both forms of encroachments led the Indians to feel that their way of life was under attack. And due to a lack of understanding, the English saw the Indians largely as helpless savages who were on the edge of being sub-human. Finally, English diseases were killing massive amounts of Native Americans. While some Indian tribes were allied with the English, those who fought against the English were in a struggle to preserve their identities.

The English, on the other hand, were desperate not to lose their Englishness. They feared that their identities would be lost due to their separation and that they would become Indianized. They also did not want to be incredibly violent towards the Indians, since this would make them like the Spanish Conquistadors. Ultimately, Lepore argues, the English colonists developed their American identity by triangulating between the English and Indian experiences by using the Indian experience to differentiate themselves from the English but also to contrast themselves with the Indians. They largely fought the war because they were attacked, but King Philip's War led them to become nearly as brutal as the Conquistadors which greatly disturbed them.

The proximate cause of the war was the death of John Sassamon, a Christian Indian convert, translator and minister, who revealed Metacom's plans to attack the colonists to the English. He was then killed. When the English arrested and executed three of Metacom's advisors for the crime, Metacom began his assault in earnest. Lepore covers all the events and more in the book but largely devotes her time to analyzing the ways in which King Philip's War was the result of simultaneous identity crises on the part of the colonists and the Indians in terms of their language, habits of cruelty, religion, slavery and historical narratives.