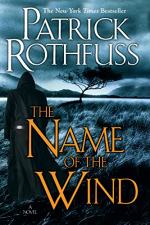 The Name of the Wind Summary & Study Guide

Patrick Rothfuss
This Study Guide consists of approximately 49 pages of chapter summaries, quotes, character analysis, themes, and more - everything you need to sharpen your knowledge of The Name of the Wind.

The Name of the Wind Summary & Study Guide Description

The Name of the Wind Summary & Study Guide includes comprehensive information and analysis to help you understand the book. This study guide contains the following sections:

This detailed literature summary also contains Quotes and a Free Quiz on The Name of the Wind by Patrick Rothfuss.

The following version of this book was used to create this study guide: Rothfuss, Patrick. The Name of the Wind. Daw Books. April, 2009.

The Name of the Wind is an epic fantasy by Patrick Rothfuss in which the legendary hero Kvothe, now in hiding as Waystone Inn owner Kote, recounts his past experiences to Chronicler, a story collector. The book forms the first of the three parts of Rothfuss’s Kingkiller Chronicle. When the novel begins, demon spiders have been encountered near the Waystone Inn. Only a few locals who regularly gather at the Inn are aware of them. Meanwhile, Devan Lochees, a famous writer and story collector known as Chronicler, comes to the Inn to see if Kote is actually Kvothe. With a little urging, Kvothe agrees to tell the story of his life to Chronicler. Kvothe explains it will take three days. Each day forms a book in Rothfuss' trilogy.

The novel steps back in time. Kvothe is a child among the Edema Ruh, the class of traveling performers made up of countless troupes. Kvothe’s parents are musicians, who are well-respected for their songs. The troupe takes on an arcanist, Ben Abenthy, who earns his keep by providing medicines and other similar services. Abenthy, as an arcanist, is akin to a magician. He has the ability to control matter and nature through the practice of speaking, or name-calling. He begins to teach these techniques to Kvothe. He encourages Kvothe on to University. Abenthy eventually leaves the troupe for a young woman, and Kvothe himself narrowly misses a mysterious attack on the troupe by the Chandrian demons who massacre everyone –including Kvothe’s parents.

Kvothe, heartbroken, takes to living on the streets. By the age of fifteen, he decides he must solve the mystery of the troupe’s murder. He sets out for University. On the way, he meets a stunningly beautiful girl about his age named Denna, who is a traveling musician. At University, Kvothe works hard to gain admission. Then, he works hard as a student. He becomes friends with Wilem, Manet, Sovoy, and Simmon, while becoming enemies with Ambrose, a member of the nobility. Kvothe also befriends a pretty girl named Auri, who has taken to living beneath the University and its town in the Underthing, an elaborate network of tunnels and ruins from previous centuries. Kvothe begins playing the lute at a local pub. He becomes famous for the beauty of his music. Kvothe is less successful in his attempts to romance Denna, who shows up in town.

When Kvothe learns of an attack on a wedding seventy miles to the north, he heads out to discover what happened. There, he learns that Denna is the sole survivor of the attack. She had been hired to perform at the wedding. Denna, unfortunately, did not see the attack. She helps Kvothe find clues. The attack seems to be the work of demons. Kvothe and Denna discover a draccus, a kind of dragon-scaled cow. The draccus attacks the nearby town, but Kvothe uses a binding of iron to kill the draccus. Kvothe is celebrated as a hero.

Back at the University, Kvothe continues on in his studies. He comes to explore the Underthing with Auri, and he discovers many massive, old rusting machines that he cannot understand or describe. Kvothe is also able to gain access to the Archives through tunnels in the Underthing. He had previously been banned from the Archives. Kvothe solicits the help of fellow student, Fela, to help him track down information from centuries ago regarding the Chandrian.

The novel suddenly shifts back to the present as Kvothe (as Kote) decides he has spoken enough for the day. That night, Kote’s apprentice, Bast, tells Chronicler that recalling the past has brought Kvothe back to life. Bast wants Chronicler to keep Kvothe talking so that Kvothe will remember who he was and still is in life.

More summaries and resources for teaching or studying The Name of the Wind.

The Name of the Wind from BookRags. (c)2022 BookRags, Inc. All rights reserved.