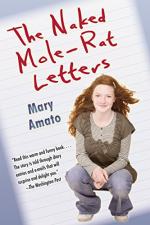 Mary Amato
This Study Guide consists of approximately 44 pages of chapter summaries, quotes, character analysis, themes, and more - everything you need to sharpen your knowledge of The Naked Mole-Rat Letters.

This detailed literature summary also contains Quotes and a Free Quiz on The Naked Mole-Rat Letters by Mary Amato.

Frankie Wallop is in seventh grade, and she feels that everything is going great until her father, Robert, returns from a conference in Washington. Frankie finds an email to her father from a woman named Ayanna Bayo. She is thanking Robert for the time they spent together and a kiss they shared. Frankie's mother died years earlier, and Robert has not dated during that time. Frankie immediately realizes that she has to stop this budding romance before it gets out of control. The problem is, Ayanna is smart enough to see through Frankie's efforts. Frankie soon learns that the happiness of others is just as important as her own.

Frankie's first emails to Ayanna are filled with lies about her family, including the horrible diseases her two younger brothers have. When that does not dissuade Ayanna, Frankie's lies become more outrageous. She eventually goes so far as to tell Ayanna that her father is engaged to be married and even signs her father's name to one of the emails. By that time, Ayanna has communicated with Frankie and Robert long enough to recognize that Frankie has lied. Ayanna makes it clear she is disappointed in Frankie's choice, but Frankie remains unrepentant, feeling that the ends justify the means. As Frankie scrambles to keep track of any communication between Ayanna and Robert, she finds that she is not focusing on school work and that she is willing to do anything to fight against the relationship that seems to be budding between Robert and Ayanna.

At one point, Frankie feels compelled to get home to a computer. She lies to a teacher about having a dentist appointment and lies to a neighbor, saying it is her birthday. When the neighbor provides the family with a birthday cake for the occasion, Frankie lies to her father, saying the woman is clearly becoming demented. She feels her best friend, Beth, does not understand what she is feeling and that relationship spirals. She reaches out to Johnny, a boy with a poor reputation, for help hacking into her father's work emails. Frankie is shocked to discover she likes Johnny once she gets past his natural barriers, but she is horrified when everyone begins to tease them.

Frankie is surprised when she opens up to Ayanna, who advises Frankie to “follow her heart” as she makes decisions about what to do next. The final blows happen when Frankie ignores her youngest brother which prompts him to leave the house on his own one evening. Robert and others begin to search for the child and Frankie makes pizza in anticipation of their return. When she realizes she knows where her brother has gone, she leaves the house and returns to find the kitchen on fire. The fire damages only the kitchen but Frankie has reached the end of her rope.

Robert and Frankie finally have an open conversation, and each talks about what worries them most. The family comes together, and Frankie makes the decision to remain friends with Johnny, regardless of what others think of that. As the novel comes to a close, Frankie sends Ayanna a lengthy email, describing the events of her day and her own realization that change is not always bad.

More summaries and resources for teaching or studying The Naked Mole-Rat Letters.