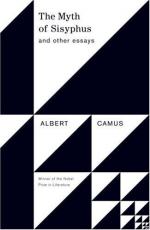 The Myth of Sisyphus and Other Essays Summary & Study Guide

Albert Camus
This Study Guide consists of approximately 27 pages of chapter summaries, quotes, character analysis, themes, and more - everything you need to sharpen your knowledge of The Myth of Sisyphus and Other Essays.

The Myth of Sisyphus and Other Essays Summary & Study Guide Description

The Myth of Sisyphus and Other Essays Summary & Study Guide includes comprehensive information and analysis to help you understand the book. This study guide contains the following sections:

This detailed literature summary also contains Topics for Discussion and a Free Quiz on The Myth of Sisyphus and Other Essays by Albert Camus.

The Myth of Sisyphus is a collection of essays written over the course of about twenty years that revolve around the subjects of freedom from ideology and meaning and living life to the fullest degree. The title essay, which makes up the majority of the collection, investigates these concepts in an abstract, philosophical manner, while the rest of the essays are illustrations of the principles contained in the first.

The first question in philosophy is whether or not one ought to kill himself. It is more important than any other question since it deals with an issue that is obviously more important than any other: the meaning of life. It is implicitly assumed that if there is no meaning to life, then one might as well commit suicide. Others try to escape the meaninglessness of life through religious hope. In any case, it seems that everyone who comes to the conclusion that the world is absurd—that is, that the world cannot be understood with human reason—does everything they can to try to escape that conclusion, as can be seen in the philosophies of Kierkegaard and Chestov and in the literary works of Dostoevsky and Kafka.

However, acknowledging the absurdity of the world does not entail suicide, nor is it necessary to try to escape it. In order to be philosophically honest, one must stick to the principles which served as the foundation for one's inquiry, and since the first and most obvious fact is that the world is absurd, that fact must never be abandoned. This means one must live a life which constantly revolts against the natural impulses to understand the world or to find meaning in it or a future world. Rather, life, absurd as it is, must be lived as it is in the present. This implies that the absurd man has a greater freedom than any other, because he is not bound by any religion or meaning in his life; he is free to do what he pleases, while others are slaves to their beliefs. The absurd man values above all else experience, and wants to experience as much as possible, so long as he remains conscious, in that experience, of the absurdity of existence, for in this way he perpetuates his revolt. Suicide, then, is ruled out, since death is the end of experience and therefore of his freedom.

The absurd man takes great joy in creation—as it is an extension and reliving of experience—and thus it is entirely possible to be an absurd artist. Unlike other artists, however, the absurd artist does not find meaning in his work, nor does he attempt to give it meaning. Rather, art for the absurd man is best when it simply portrays the absurdity of the world as it is. This also helps the artist remain conscious of that absurdity.

"The Summer in Algiers" and "The Minotaur" both provide illustrations of cities which, unconsciously, live according to this creed of absurdity. In both cases, the citizens do not enslave themselves to any conception of eternity or hope, but rather simply live for the present and the joys which it provides.

"Helen's Exile" is a commentary on the poor state of European society which has lost sight of beauty, in contrast to ancient Greek society which was able to always keep it in mind.

"Return to Tipasa" is an account of Camus' return to his hometown of Tipasa in which he rediscovers the natural innocence of his youth which was lost when he went to war. This innocence is characterized as a lack of any kind of moral system or philosophy, to which Camus believes Europe is now enslaved.

"The Artist and His Time" is an interview of Camus in which he describes the role of the artist as combining the purity of artistic creation with the need to inspire social and political changes.

More summaries and resources for teaching or studying The Myth of Sisyphus and Other Essays.

The Myth of Sisyphus and Other Essays from BookRags. (c)2022 BookRags, Inc. All rights reserved.