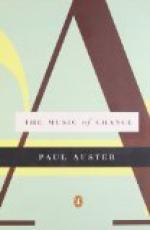 This Study Guide consists of approximately 33 pages of chapter summaries, quotes, character analysis, themes, and more - everything you need to sharpen your knowledge of The Music of Chance.

The Music of Chance Summary & Study Guide includes comprehensive information and analysis to help you understand the book. This study guide contains the following sections:

This detailed literature summary also contains Quotes and a Free Quiz on The Music of Chance by .

The following version of this book was used to create this guide: Auster, Paul. The Music of Chance. Penguin Books, 1990.

At the beginning of The Music of Chance by Paul Auster, Jim Nashe’s wife Thérèse has left him. Nashe gives custody of his daughter Juliette to his sister, as Nashe is unable to raise Juliette on his own. Shortly thereafter, a lawyer finds Nashe and informs him that Nashe’s estranged father has passed away and has bequeathed $200,000 to Nashe in his will. Nashe, a professional firefighter in Boston, Massachusetts, quits his job and goes on an aimless, year-long road trip. Eventually, his money begins to run low. He picks up a hitchhiker one day, who introduces himself as Jack Pozzi, a professional gambler. Jack says that he recently played poker against two millionaires, Bill Flower and Willie Stone, and that if Nashe can help him buy-in to another poker game with Flower and Stone, he can make a lot of money for himself and for Nashe.

Nashe and Jack begin working on the wall the next day. They are supervised by Calvin Murks, the handyman who works for Flower and Stone. The work is grueling. Nashe and Jack reside in a trailer on the property during their off hours. Following Flower and Stone’s order, Murks takes precautions to prevent Nashe and Jack from running away. Jack is resentful with regards to his circumstances. One day he loses his temper with Murks and punches him in the face. The next day, Murks arrives at the work site with a gun in a holster, which he wears at all times while supervising.

On the day that Nashe and Jack believe they have paid off their debt, Stone and Flower allow Nashe and Jack to have a private party in their trailer. However, the next day, Nashe and Jack are told that they are still in debt due to the cost of their food, personal expenses, and the cost of the party. Jack decides to run away, and Nashe helps him dig a hole under the estate’s perimeter fence through which he can escape. Nashe decides to stay and continue working until his debt is paid off.

The next morning, Nashe finds Jack beaten and bloodied outside the trailer. Murks arrives, sees Jack, and takes him away in his truck, saying that he is taking Jack to a nearby hospital. However, Nashe believes that Murks and Floyd (Murks’ son-in-law) are responsible for Jack’s injuries. He also believes that instead of taking him to a hospital, they will simply kill him. Nashe continues working, with plans to go to the police after he pays off his debt and works one additional week to make some traveling money.

On the day that Nashe pays off his debt, Murks and Floyd take him to the nearby town for a celebratory round of drinks. After drinks, Murks and Floyd let Nashe drive the car back to the estate. On the road, Nashe becomes distracted for a second and sees that he is about to hit another car head-on. He sees that the collision is unavoidable at that point. Instead of swerving or hitting the breaks, he simply presses down harder on the accelerator.

More summaries and resources for teaching or studying The Music of Chance.

The Music of Chance from BookRags. (c)2022 BookRags, Inc. All rights reserved.