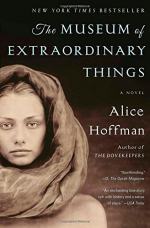 Alice Hoffman
This Study Guide consists of approximately 49 pages of chapter summaries, quotes, character analysis, themes, and more - everything you need to sharpen your knowledge of The Museum of Extraordinary Things.

The Museum of Extraordinary Things Summary & Study Guide includes comprehensive information and analysis to help you understand the book. This study guide contains the following sections:

This detailed literature summary also contains Quotes and a Free Quiz on The Museum of Extraordinary Things by Alice Hoffman.

Coralie Sardie is the daughter of the owner of The Museum of Extraordinary Things: a man known as the Professor. She grew up on Coney Island in New York during the late nineteenth and early twentieth centuries. Professor Sardie had strange views about health and fitness and forced Coralie to swim in the sea every night during the summer months and to take ice baths during the winter. Although their home was attached to the museum, Coralie was not allowed to go inside or look at any of the exhibitions before her tenth birthday because her father feared that the specimens and human performers on display would be too harrowing and distressing for a child. The Professor employed numerous humans with unusual appearances to perform in the museum. On Coralie’s tenth birthday the Professor revealed that she was to become one of the performers – The Human Mermaid – because of the webbed skin on her hands.

When Coralie was older, her father concocted a scheme to fake the existence of a sea monster by having Coralie swim at night in the Hudson River. One night, the current took Coralie on an unexpected course and she found herself lost in the woods where she encountered a young man with whom she became fascinated, despite the fact they did not speak.

The young man in the woods was Eddie Cohen, a Ukrainian immigrant working as a professional photographer. Eddie and his father escaped Ukraine together when Eddie was just a child after Eddie’s mother was killed. Eddie believed his father had tried to commit suicide after being fired from his factory job in New York. This created a rift between father and son which eventually led to Eddie abandoning his father and living alone. Eddie worked as a press photographer and was on the scene at The Triangle Shirtwaist Factory Fire in New York in 1911. After the fire, Eddie was visited by a man called Samuel Weiss whose daughter Hannah had worked in the Triangle factory. No trace of Hannah’s body or possessions was found in the aftermath of the fire and Samuel asked Eddie to help him find Hannah.

During another night swim in the Hudson, Coralie discovered the body of a dead woman. When she told her father about the woman and he insisted on taking the corpse back to the museum so he could turn the body into something he could claim was a sea monster. While investigating the disappearance of Hannah Weiss, Eddie spoke to a hermit living in the woods along the banks of the Hudson who told him that he had seen someone take the body of a drowned woman. This led Eddie to The Museum of Extraordinary Things where he met and fell in love with Coralie.

Coralie helped Eddie smuggle Hannah’s body out of the museum. When the Professor discovered that Coralie had betrayed him he locked her in the basement. Meanwhile, Eddie found the man who had murdered Hannah Weiss and brought him to justice. An old employer of Eddie’s told him that Eddie had been wrong about his father and that he didn’t try to commit suicide.

A devastating fire broke out at Dreamland, another attraction on Coney Island, and the fire spread towards The Museum of Extraordinary Things. The Professor was killed while trying to put out the flames on the roof of the museum. Eddie rescued Coralie from the basement and Coralie saved both of their lives by hiding herself and Eddie in the tank of water where she performed as The Human Mermaid until the flames had passed. Eddie and Coralie left Coney Island together and got married.

More summaries and resources for teaching or studying The Museum of Extraordinary Things.

The Museum of Extraordinary Things from BookRags. (c)2022 BookRags, Inc. All rights reserved.