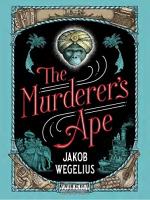 Jakob Wegelius
This Study Guide consists of approximately 56 pages of chapter summaries, quotes, character analysis, themes, and more - everything you need to sharpen your knowledge of The Murderer's Ape.

This detailed literature summary also contains Quotes and a Free Quiz on The Murderer's Ape by Jakob Wegelius.

Sally Jones is fully aware that she is a gorilla. She lives and works among humans rather than living in the jungle. She has some early memories of a life of cruelty; however, she does not know how she came to that point. Chief Henry Koskela rescues her from her cruel owner. Henry treats her as a friend rather than as a possession. Sally is devoted to him and considers him to be her best friend.

Sally wears overalls and a cap, and she works aboard the Hudson Queen, the ship Henry owns. She is a mechanic and knows all about the working parts of the ship. She and Henry crew the ship alone.

Sally and Henry are in Lisbon, and they are desperate for a job when Alphonse Morro approaches them. He offers to pay them well to move some cases of tile, but Henry is convinced there is something wrong when they have to pick up the shipment in the middle of the night. Henry and Sally learn the boxes actually contain guns. A fight breaks out aboard the ship. The Hudson Queen – along with the cargo – sinks. Henry and Sally return to Lisbon. They are now penniless and without a ship. One day, they encounter Alphonse on the dock. He is clearly intent on killing Henry but changes his mind and runs. Henry chases him, and Alphonse falls into the water. He does not surface, and everyone assumes he is dead. Sally recovers a locket with a photo of Alphonse's dead fiance. Henry is charged with his murder though Sally knows it was an accident.

Sally must hide, and she spends days in an attic filled with pigeons as the police search for her. She notices a woman in an apartment across the street, later identified as Ana. Ana makes it clear that Sally is welcome in her home, and Sally moves in. Ana works long hours, and Sally helps by mending socks Sally takes in for extra money. When Henry is sentenced to 25 years in prison, Sally falls into a deep depression. Ana misses work to take care of her, but that cannot go on long. Ana's landlord, Luigi, reluctantly agrees to let Sally stay in his shop. He makes and repairs instruments and soon discovers that Sally is an intelligent, adept pupil. Sally begins to work on instruments and becomes close friends with both Ana and Luigi, though she desperately misses Henry.

Sally goes to a nearby cemetery with Ana and Luigi, who provide music for funerals. She discovers the grave of Elisa Gomes, Alphonse's fiance. One day, a man brings a letter instructing the cemetery caretaker to use it to care for Elisa's grave. Sally becomes convinced that Alphonse sent the letter, and she sets out on a journey to find him. The trip takes her through treacherous situations and to the palace of a maharaja. Sally makes friends but discovers that not everyone can be trusted. She eventually makes her way back to Lisbon, as does Alphonse. Alphonse leaves a letter that describes the truth about the situation. A police official had insisted Alphonse find a ship to transport guns that were going to be used by revolutionaries planning to overthrow the government. Alphonse had used his accident as a means of escaping but felt guilty that Henry was in jail. Alphonse dies of malaria shortly after returning to Lisbon.

Henry is released, and he and Sally manage to save the Hudson Queen. As the novel comes to an end, Sally writes that they are working to restore the ship and that they will someday leave Lisbon. The parting will be bittersweet. Though she and Henry long to be at sea again, they will hate to leave their good friends, especially Ana and Luigi.

More summaries and resources for teaching or studying The Murderer's Ape.