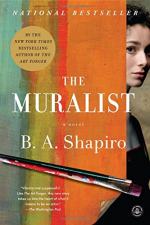 B. A. Shapiro
This Study Guide consists of approximately 132 pages of chapter summaries, quotes, character analysis, themes, and more - everything you need to sharpen your knowledge of The Muralist.

The Muralist Summary & Study Guide includes comprehensive information and analysis to help you understand the book. This study guide contains the following sections:

This detailed literature summary also contains Quotes and a Free Quiz on The Muralist by B. A. Shapiro.

The following version of this book was used to create the guide: Shapiro, B.A.. The Muralist. HarperCollins, 2016.

"Kristallnacht: November 9-10.” The Center for Holocaust and Humanity Education, 2009, www.holocaustandhumanity.org/kristallnacht/kristallnacht-november-9-10/.

Danielle Abrams is an art appraiser specializing in Abstract Expressionism. The novel opens as she uncovers three hidden squares of painted canvases hidden behind the art she is tasked with appraising. She has a strong gut feeling that the squares were painted by her great-aunt Alizée Benoit, a Jewish-American artist who went missing during World War II. The narrative alternates between Alizée’s perspective in New York City in 1939-1940, as the Nazi occupation threatens the lives of her family in France; and that of Danielle in 2015-2016 working at Christie's art gallery, which auctions thousands upon thousands of dollars worth of unearthed masterpieces. Many of the renowned American Abstract Expressionists, such as Pollock, Rothko, and Krasner, worked for the Works Progress Administration (WPA) during the Great Depression, and through the Second World War as muralists and commissioned artists. Danielle believes Alizée is one such artist and becomes determined to unravel the truth behind her great-aunt's disappearance. Intertwined with this mystery is Danielle's search for the link between Alizée and the squares as she sifts through the past.

As Hitler’s Nazi forces descend upon France, the letters Alizée receives from her Jewish family living in Europe bring bad news with increased in pitch and fervor: her Uncle is imprisoned in Drancy Internment Camp and never returns, her cousins, aboard the S.S. St. Louis are turned away from American soil and her brother goes missing. Determined to bring her family to safety in America, Alizée fights for the rights of European immigrants and refugees. She joins the socialist organization, Americans with No Limits (ANL), and repeatedly petitions the government for an increase in visas. But Breckenridge Long, the Assistant Secretary of State, stands in her way; Long is a bigot and anti-Semite, blocking thousands of visas and lying about the number of refugees permitted into the country. Alizée is successful in passing along a top-secret memo proving Long's illegal actions to her new friend and mutual art lover Eleanor Roosevelt; however, the president of the United States opts to block the memo, ultimately caving to anti-immigrant sentiment in the context of the Depression. Meanwhile, Alizée paintings are becoming more and more political, a change that her artist friends do not approve of. Politics, they believe, have no place in art.

Determined to use her art to initiate change, Alizée plans to replace a WPA mural with a new, abstract one focused on the ravages of war and the refugee crisis in Europe. She commissions the help of Lee, Mark, Jack, and Bill. Together, they paint and collage 'Montage,' a multi-paneled mural meant to depict the themes and emotions associated with war. In the face of mounting concern for her family in France, reminiscent of her parents' deaths as a child, Alizée exhibits increasingly disturbing mental health issues including depression, mania, depersonalization, and insomnia. Out of desperation, Alizée joins a plot to assassinate Breckinridge Long. After the plot fails, Alizée, fearing the consequences of her involvement and political escapades, cuts the mural into pieces. During a fire that consumes her apartment building, Alizée experiences a mental breakdown and voluntarily commits herself to Bloom Sanatorium. Two days later, she discharges herself from the sanatorium and flees to France in search of her brother and family. On a train to Arles, Alizée is captured by the Nazis and sent to Drancy Internment Camp.

Meanwhile, in the present, Danielle is filling in the missing pieces in Alizée's narrative. A conversation with her grandmother reveals that Henri had met Lee Krasner and Jackson Pollock at their home in Long Island and had discussed Alizée’s disappearance; however, Danielle does not take this information at face value, as her grandmother's memory has deteriorated significantly with age. Danielle's grandmother passes away, and an unsent letter written by Danielle's grandfather Henri to his lost sister Alizée is unearthed. Another panel is discovered among her grandfather’s things, spurring on Danielle’s determination to uncover the truth. She travels to France, where she visits the Holocaust Memorial Museum. On the Wall of Names, Danielle identifies many members of her Benoit family who perished as a result of the Holocaust, including Alizée's aunt, uncle, and cousin. Danielle is devastated by their names carved into the stone; she dreads her trip to Drancy the next day but feels that she needs to go. Danielle retraces Alizée’s steps to the Drancy internment camp, now a museum. It is there, while wandering the streets, that Danielle stumbles upon a gallery featuring paintings with a striking similarity to those of Alizée but painted by Josephine Villeneuves, a baker’s wife. From Josephine’s husband, Matthieu, Danielle learns that Alizée survived the war by hiding in plain sight. After escaping Drancy, she married the baker’s son disguised as his Parisian cousin. The fear of persecution and the loss of her family never left Alizée; she kept her Jewish heritage and true identity a secret, believing that all of her family had died in Nazi camps.

Upon returning from France, Danielle proves her aunt’s pivotal role in the Abstract Expressionist movement. Several more panels of “Montage” are collected and assembled in an exhibition featuring “Turned” and “Lily Pads” as well as Danielle’s own artistic interpretation of “Montage.” In the exhibit, information is provided on the social and political context of America for its participation in the Second World War, as well as Alizée's brave political escapades. Inspired by her great-aunt's story, Danielle returns to her true passion for painting.

More summaries and resources for teaching or studying The Muralist.

The Muralist from BookRags. (c)2022 BookRags, Inc. All rights reserved.