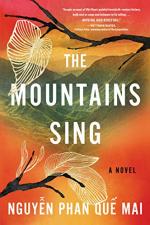 Nguyễn Phan Quế Mai
This Study Guide consists of approximately 62 pages of chapter summaries, quotes, character analysis, themes, and more - everything you need to sharpen your knowledge of The Mountains Sing.

This detailed literature summary also contains Quotes and a Free Quiz on The Mountains Sing by Nguyễn Phan Quế Mai.

The following version of the book was used to create this guide: Phan Que Mai, Nguyen. The Mountains Sing. Algonquin Books, 2020.

The novel is divided into two storylines: the main story in Hà Nội, where Hương lives through the war and its aftermath through the 70s, and Diệu Lan’s life from 1930–1956 which includes the Great Hunger and the Land Reform, during which she escaped to Hà Nội. Diệu Lan’s narrative is embedded within Hương’s; she tells Hương these stories during the Vietnam War/Resistance War Against America.

Diệu Lan narrates the story from a first-person perspective, and sometimes breaks her narration to speak directly to Hương. She begins with her childhood in the Nghệ An province. Her parents were prosperous farmers, and she lived a comfortable life with her parents, Auntie Tu, Brother Công, and their private tutor, Master Thinh. Her carefree childhood was disrupted by two things: her fear of the Wicked Ghost, a violent tax collector, and the local fortune teller, who told her she would one day end up as a beggar.

Diệu Lan marries and has children in the house she grew up in. As the Japanese occupation intensified, her family’s farm suffered, and her father decides to travel to Hà Nội to sell potatoes. Diệu Lan and Công accompany their father; however, their father is decapitated by Japanese soldiers.

Three years later, war and drought trigger The Great Hunger, where farmers were unable to grow food and an estimated two million people died from starvation. On the edge of death, Diệu Lan and her mother walk to the forest for food. They find a cornfield, but Wicked Ghost catches them, kills Diệu Lan’s mother, and steals her ruby necklace—their only family heirloom left. However, an employee of Wicked Ghost, Mr. Hai, releases Diệu Lan and gives her enough corn to survive until the Great Hunger ends.

Ten years later, Diệu Lan’s husband joins the Viet Minh because of their help during the Great Hunger. However, he believes in democracy and dissents from their values; because of this, he is poisoned and killed by the Viet Minh. Despite this, Diệu Lan and Công rebuild their family business. Five months after Công’s death, the Trần family property is seized by the People’s Agricultural Reform Tribunal, who detest landowners. Công and Minh are captured, Công is killed, and Minh escapes to the South. Mrs. Tu helps Diệu Lan and her children escape the village.

With no money, Diệu Lan plans to walk to Hà Nội, where she can connect with her old teacher, Master Thinh. One by one, her children are separated in different villages on the way to Hà Nội, either because of sickness or their own volition. Diệu Lan and her baby Sáng walk the rest of the way together; Diệu Lan buys materials to sell fruit and scrape by on her walk.

When she arrives in Hà Nội, Diệu Lan learns Master Thinh died. She is hired as a housekeeper by his relatives, who pay her very little. Since she was robbed when she first arrived in Hà Nội, she takes free self-defense classes to protect herself. One day, Diệu Lan uses these skills to disarm a robber who threatens her employer. Her employer gives her gold and silver as severance pay, which is enough for Diệu Lan to buy a house in Hà Nội and rent a car to collect her children.

Hương’s story begins during the war in 1972. She lives in Hà Nội with Dieu Lan, but they temporarily relocate to a mountain village when it becomes unsafe for them to live in Hà Nội. When they return, their house is destroyed. One day, soldiers come to their makeshift house to relay the news that Thuận, Diệu Lan’s fourth son, died in the war. Soon after, Diệu Lan takes a job as a trader on the black market, which causes their village to shun their family.

Diệu Lan makes amends with the community by buying a drinking well. Her job allows her to buy a bike and save up money to rebuild their house. In 1975, Hương’s mother, Ngọc, returns home. Ngọc is depressed and traumatized, isolating herself from Diệu Lan and Hương. Eventually, Ngọc stays at Auntie Duyen’s house for more space and recovery.

Shortly after, the war officially ends. Uncle Sáng returns as a high-ranking community party official and detests Diệu Lan’s job as a trader. Uncle Đạt also returns home, though he lost both his legs due to a land mine and he has developed a drinking problem. Đạt tells Hương the story of his experience in the war, and says he briefly saw Hương’s father while he was recovering from malaria.

Desperate to be close with her mother, Hương reads Ngọc’s private journal and learns that she was pregnant with the enemy’s baby. Ngọc explains that she was captured by the enemy and raped, which is why she had an abortion. Hương, Ngọc, and Diệu Lan reconcile. Uncle Đạt Đạtes his girlfriend again and promises to stop drinking. Hương meets Tâm, a new student and farmer boy from the middle region.

In 1979, the family finally learns of Minh’s whereabouts and visits him in Southern Vietnam. He is dying of cancer, but they receive closure on what happened to him during the years they were apart. Auntie Hạnh leaves because he fought for the South, but the rest of the family stays during his last moments.

In 1980, Hương accompanies Diệu Lan to her childhood house, which is still seized by seven families. They also meet Tâm’s family, as Tâm intends to marry Hương. However, Diệu Lan is shocked to learn Tâm’s grandfather is Wicked Ghost. When Tâm’s mother returns her mother’s ruby necklace, Diệu Lan accepts Tâm and gives him the blessing to marry Hương.

In 2017, Hương visits Diệu Lan’s grave in Nghệ An and burns a manuscript of her stories, hoping they will reach her in heaven.

More summaries and resources for teaching or studying The Mountains Sing.