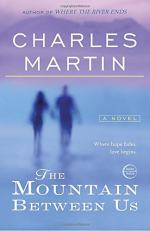 The Mountain Between Us Summary & Study Guide

The Mountain Between Us Summary & Study Guide Description

The Mountain Between Us Summary & Study Guide includes comprehensive information and analysis to help you understand the book. This study guide contains the following sections:

This detailed literature summary also contains Quotes and a Free Quiz on The Mountain Between Us by Charles Martin.

The following version of this book was used to create this study guide: Martin, Charles. The Mountain Between Us. Broadway Books, 2011.

The Mountain between Us begins in an airport terminal with Ben Payne, the main character, waiting for his flight. He met Ashley Knox, a woman bound for home, waiting on the same plane, preparing to be married when she gets there. Their flight was cancelled, and Ben, wanting to get home hired a charter plane. He offered Ashley a ride on it. She agreed. The pilot had a heart attack mid-air and crashed into the side of the mountain. The pilot did not survive but Ben and Ashley did, along with the pilot’s dog. Ashley broke her leg on impact, and Ben broke a few ribs.

Through parts scavenged from the plane, Ben built a makeshift sled and snow shoes and attempted a self-rescue, worried that no one was coming for them, as their flight was not registered with anyone who would know to come looking for them. Over the span of weeks, Ben dragged Ashley through the wilderness towards safety. During this time he also dictated to his personal recorder, leaving messages for his wife Rachel back home. Eventually, they holed up in an abandoned scouts’ cabin, near death by this point. The cabin allowed them a short respite, but they had to keep going if they wanted to get rescued. When they spotted the first real sign of civilization, a light and a smoke trail, they attempted to scale a steep drop off. This caused an avalanche. Ashley broke her leg again, and Ben had to abandon her and ran for help. He found it, and they were rescued.

Ashley recuperated in the hospital, and Ben visited the charter pilot’s wife to deliver his condolences. Months passed and Ben was invited to Ashley and her fiancé’s rehearsal dinner. Ben left a recorder for Ashely as a gift. Roughly a few weeks later, Ashley showed up at Ben’s doorstep asking to see his wife Rachel. Ben showed her, revealing that Rachel had been dead the whole time. Ashley revealed her own secret then as well, that she left her now ex-fiance to be with Ben, unable to shake the journey they had taken together.

The Mountain Between Us from BookRags. (c)2022 BookRags, Inc. All rights reserved.