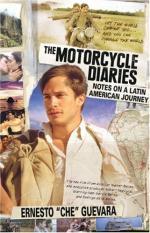 Che Guevara
This Study Guide consists of approximately 23 pages of chapter summaries, quotes, character analysis, themes, and more - everything you need to sharpen your knowledge of The Motorcycle Diaries.

The Motorcycle Diaries: Notes on a Latin American Journey Summary & Study Guide includes comprehensive information and analysis to help you understand the book. This study guide contains the following sections:

This detailed literature summary also contains Topics for Discussion and a Free Quiz on The Motorcycle Diaries: Notes on a Latin American Journey by Che Guevara.

The Motorcycle Diaries consist of diary entries written by Ernesto "Che" Guevara as he travelled with his friend Alberto Granado across Latin America. Che Guevara was born in 1928 on June 14th in Rosario, Argentina. He grew up middle class, the son of Ernesto Guevara Lynch and Celia de la Serna. Che grew up with asthma, which prevented him from going to school until he was nine; he grew up in Alta Gracia, a town new Cordoba. Che went to Buenos Aires for medical school in 1948 and in 1950 took a break to embark on a 4,500 kilometer journey around the north of Argentina. The next year, in October, Che and his friend Alberto Granado come up with the idea to ride La Poderosa II, Alberto's motorbike, all the way to North America. Alberto is a biochemist interested in lepers and leprology, whereas Che is a young medical student with a budding interest in the topic. They begin their journey leaving Cordoba in December 1951 and meet Che's family for farewells in Buenos Aires. The book consists of notes written on their trip from December well into 1952.

Guevara is most famous for his role in the establishment of the communist dictatorship government of Fidel Castro in Cuba in 1956-58. He helped Castro to overthrow the authoritarian ruler of Cuba at the time, Batista. They eventually win, with Che as one of the commanders of the revolutionary forces. He then becomes a leader in the government but believes in spreading communist revolution across Latin America. He becomes well-known across the world for his advocacy on behalf of the world's poor and tries to start revolution in other countries. He visits to Soviet Union, China and many other communist countries. After he is killed in 1966 trying to start a communist revolution in Bolivia, Che becomes the stuff of legend; he is quickly elevated to a symbol of working class revolution, social and economic equality, and generally as a hero fighting for justice. The Motorcycle Diaries, while only sometimes touching on political topics, helped to create the romantic mystique that surrounds Che Guevara. He is a young man at the time, twenty-three and twenty-four, travelling the countryside, often observing the poverty of working class Latin Americans and coming to believe in a proletarian revolution that would eventually establish a Pan-Latin-American communist state. Here one sees the budding communist revolutionary in Che, whose ideas only begin to coalesce as he and Alberto travel throughout Argentina, Chile, Peru, Colombia and Venezuela before Che finishes his medical degree. The book contains many small entries arranged chronologically, as a diary is typically organized. It details his and Alberto's travels, their locations, where they stayed, what they ate, their mode of travel and their health, along with the occasional description of the countryside and characters they meet and the social implications of their observations.

More summaries and resources for teaching or studying The Motorcycle Diaries: Notes on a Latin American Journey.