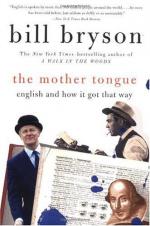 Bill Bryson
This Study Guide consists of approximately 29 pages of chapter summaries, quotes, character analysis, themes, and more - everything you need to sharpen your knowledge of The Mother Tongue.

This detailed literature summary also contains Topics for Discussion and a Free Quiz on The Mother Tongue by Bill Bryson.

After a quick examination of the role that English plays in the world today, Bryson goes back in time to study the origins of language itself. After explaining the physical properties that enabled early humans to speak, Bryson traces the initial human communities as they make their way across Europe to found what is today the United Kingdom. The history of the language on this island is full of interesting twists and turns as the language shifts with each change in power. From the Celts and the Romans to the Anglo Saxons and the Normans, the language of England grows and develops with each new wave of immigration and takes into itself words and ideas from far-flung corners.

The transient nature of the English language continues as the English speaking colonies of the United States of America, Canada, Australia, and New Zealand develop into their own national identities with their own brands of English. While many have historically feared that the English language would splinter all over the world, in fact, the language has managed to incorporate the new and different accents into a world language that no one country owns. The influences between the colonies and the United Kingdom shift and change each other so that all English speaking countries are affected by the range of English available in the world and are able to connect to a variety of different accents and cultures around the world.

In addition to the history of language, Bryson examines how language functions. He charts its changing pronunciation and spelling and discusses how the language that currently exists today reflects the prejudices of many centuries of printed material. Tracing the influence of Shakespeare and other notable figures in the development of language, he also provides historical and linguistic detail about the first printed books, linguistic studies, and dictionaries of the English language.

A final section of the book deals with the lighthearted side of the language question. Here, Bryson examines the ins and outs of swearing as well as explaining the naming traditions for people and places in the English-speaking world. Bryson also includes a section on word games in English and demonstrates their popularity as an expression of the cultures that have produced them. This humorous side balances against the more elaborate scholarship that attends the rest of the book.

More summaries and resources for teaching or studying The Mother Tongue.