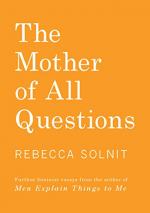 Summary
+Chapters Summary and Analysis
The Mother of All Questions
A Short History of Silence
An Insurrectionary Year
Feminism: The Men Arrive
One Year after Seven Deaths
The Short Happy History of the Rape Joke
Escape from the Five-Million-Year-old Suburb
The Pigeonholes When the Doves Have Flown
80 Books No Woman Should Read | Men Explain Lolita to Me
The Case of the Missing Perpetrator
Giantess
Important People
Objects/Places
Themes
Styles
Quotes
Topics for Discussion
Order our The Mother of All Questions Study Guide

Related Topics
Men Explain Things To Me
Hope in the Dark: Untold Histories, Wild Possibilities
Recollections of My Nonexistence: A Memoir
A Paradise Built in Hell

The Mother of All Questions Summary & Study Guide

Rebecca Solnit
This Study Guide consists of approximately 43 pages of chapter summaries, quotes, character analysis, themes, and more - everything you need to sharpen your knowledge of The Mother of All Questions.

The Mother of All Questions Summary & Study Guide Description

The Mother of All Questions Summary & Study Guide includes comprehensive information and analysis to help you understand the book. This study guide contains the following sections:

This detailed literature summary also contains Topics for Discussion on The Mother of All Questions by Rebecca Solnit.

The following version of this book was used to create this study guide: Solnit, Rebecca. The Mother of All Questions. Haymarket Books, 2017.

In each of the twelve essays included in this collection, Solnit addresses different but highly related issues pertaining to feminism.

In “The Mother of All Questions,” Solnit writes about the hypocrisy and discrimination of asking women why they do or not have children. She sees this as an example of a “closed question,” which has a predetermined answer and is asked with the intention of punishing any who deviate from that answer, and expresses her intention to instead ask “open questions,” those which provoke a person to reflect upon their own ways of thinking and broaden their perception.

In “A Short History of Silence,” the longest essay of the collection, Solnit deals with the importance of having a voice and the injustice, harm of being silenced, and the possibility of breaking through silence. Silence, she argues, exists as an institutional imposition and works to maintain itself in power. She traces through a large number of cases in which women were abused and then denied their voices, but then she ends by recounting how the feminist movement has been able to reclaim a space for women’s voices and shatter the silence they have suffered under.

In “An Insurrectionary Year,” Solnit reviews the breakthrough enjoyed by the feminist movement in the year 2014, including widely publicized sexual harassment and abuse cases against famous male celebrities. She argues that the previous work of feminists bringing the injustices of women into the public discussion and the potential of social media to amplify voices and conversations created the conditions necessary for this watershed.

In “Feminism: The Men Arrive,” Solnit addresses another aspect of the feminist breakthrough in 2014: namely, the significant number of men who began to take on feminist sympathies. She finds that male participation is necessary for the feminist cause, and sees it as a good sign that men are increasingly taking responsibility for themselves and other men with regard to sexual violence.

In “One Year after Seven Deaths,” Solnit writes about the Ilsa Vista massacre, in which a young man, fueled by misogynistic hatred, went on a shooting spree to kill women. She shows how American culture with all the misogynistic and violent messages it gives people is to blame for such tragedies. She also criticizes the proliferation of gun ownership as an unnecessary danger.

In “The Short Happy Recent History of the Rape Joke,” Solnit writes about how perceptions about jokes about rape have changed in the years around 2013-4, since some comedians have changed their minds about how to tell rape jokes and what rape jokes constitute. She draws a distinction between “punching down” and “punching up” in jokes such as rape jokes; in the former, one ridicules the victim, in the latter, the attacker. The shift in attitude has essentially been from punching down to punching up.

In “Escape from the Five-Million-Year-Old Suburb,” Solnit criticizes the from evolutionary biology of “Man the Hunter,” which posits that since prehistoric times men have been the active providers of the family while women have been the passive receivers. She argues both that women were in fact active participants and that an argument from history would not necessitate that changes should not be made in the present.

In “The Pigeonholes When the Doves Have Flown,” Solnit deals with the problem of how we use categories to deal with people in our everyday lives. On one hand, we must see through categories to the particularities of people so that we do not misjudge them; while on the other hand we must examine categories in order to deal concretely with various forms of discrimination.

In “80 Books No Woman Should Read” and a follow-up essay “Men Explain Lolita to Me,” Solnit deals with the problem of misogyny in literature. She argues that it is harmful not only to women but also to men to read stories in which women are degraded; women would lose their sense of self-worth, and men would feel empower to take abused women.

In “The Case of the Missing Perpetrator,” Solnit analyzes drinking guidelines for women issue by the Center for Disease Control, in which unintended pregnancy and violence are listed as potential consequences of excessive alcohol consumption by women. She argues that by phrasing the matter as a passive construction without mentioning men, who are the ones who inflict violence upon women and make them pregnant, the guidelines relieve them of their responsibility.

In “Giantess,” Solnit analyzes George Stevens’ 1956 film Giant about a rancher and his fiercely independent wife in a changing Texas. She shows how the film presents an example of a liberated woman who challenges societal norms and a man who loses much of his patriarchal power but does so gracefully.

More summaries and resources for teaching or studying The Mother of All Questions.

The Mother of All Questions from BookRags. (c)2022 BookRags, Inc. All rights reserved.