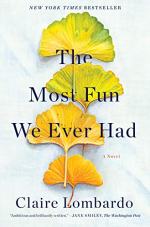 The Most Fun We Ever Had Summary & Study Guide

Claire Lombardo
This Study Guide consists of approximately 52 pages of chapter summaries, quotes, character analysis, themes, and more - everything you need to sharpen your knowledge of The Most Fun We Ever Had.

The Most Fun We Ever Had Summary & Study Guide Description

The Most Fun We Ever Had Summary & Study Guide includes comprehensive information and analysis to help you understand the book. This study guide contains the following sections:

This detailed literature summary also contains Quotes and a Free Quiz on The Most Fun We Ever Had by Claire Lombardo.

The following version of this book was used to create the guide: Lombardo, Claire. The Most Fun We Ever Had. Doubleday, 2019.

Lombardo’s novel is divided into 34 chapters, with dated flashbacks interspersed throughout in order to provide deeper exposition on the relationships between characters. Additionally, Lombardo breaks the work into four parts, named after the seasons, beginning with spring. The seasons become symbolic for the various life cycles described within the work. Lombardo also has a prologue and an epilogue of sorts, entitled “The Offspring” and “The Midst of Life” respectively. The central narrative arc of the work begins in Chapter One with the Spring of 2017, and ends on December 10, 2017, in “The Midst of Life.” The novel focuses on the extraordinary marriage of Marilyn and David Sorenson, and the byproduct of their incredible union, the four Sorenson girls.

The novel is told from the third-person, and provides perspectives from numerous characters. The work begins with Marilyn Sorenson’s perspective as she reflects on her four daughters, Wendy, Violet, Liza, and Grace. Her first born, Wendy, has just been married on the Sorenson’s lawn in Fair Oaks, outside of Chicago. She wonders how her daughters could have all turned out so markedly different, not only from one another but also from her. She finds great comfort and solace in her husband, to whom she is inextricably bonded. The Sorenson daughters all witness their parents sharing an intimate moment beneath the gingko tree and are awestruck at their love.

Part One, “Spring,” begins with Chapter One, set in current day. Wendy has asked to meet Violet for lunch but much to Violet’s shock and horror, Wendy is sitting at a table with Violet’s adopted son whom she gave up at birth. Violet quickly departs avoiding the now fifteen year-old Jonah. Grace, the youngest, is living in Oregon after graduating college, hoping to get into law school. When she receives her final rejection letter, she lies about her acceptance.

Liza, the second youngest, has just received tenure but is ensconced in a difficult relationship with Ryan, who is depressed. Violet finally speaks to Wendy and learns that Jonah is in foster care as his adoptive parents died in an accident when he was young. His foster parents are moving abroad so Wendy is hoping Violet might take him in. Violet, however, has two young boys with her husband and does not want to impact their lives. Wendy offers to take in Jonah, but the two hid the pregnancy from their parents so they must tell David and Marilyn about Jonah. Marilyn wonders if she failed the girls.

Flashbacks in Part One tell the story of David and Marilyn’s fortuitious meeting at college and David’s proposal and invitation to join him in Iowa where he will attend medical school.

In Part Two, “Summer,” Jonah moves in with Wendy to find that she is grieving the loss of her husband, and copes with alcohol and promiscuity. Violet feels as though she is losing her husband Matt, and struggles to accept Jonah into their lives. Liza becomes unexpectedly pregnant and begins an affair to avoid dealing with her relationship issues.

Grace continues to evade her family and meets her crush, Ben Barnes. Liza asks her father to connect with his colleague Gillan Levin to deliver her baby. Liza asks Gillian if she ever slept with David. Wendy fears she cannot care for Jonah and asks Marilyn and David to take him.

Part Three, Fall, tells how Marilyn nearly died giving birth to Grace, and Gillian Levin saved her. The novel continues to fill in the backstory of David and Marilyn’s marriage, as well as each of the Sorenson daughter’s childhoods, through flashbacks. It also exposes David’s somewhat secretive but platonic dinners with Gillian after work.

Jonah acclimates to living with David and Marilyn, but he witnesses Liza kissing another man and inadvertently discloses this information to Ryan. Ryan leaves Liza. David is trying to adjust to retirement, while Marilyn has become the owner of a hardware shop.

In Part Four, “Winter,” Violet continues to struggle to accept Jonah. Her boys adore him but she continues to be wary. The Sorenson sisters consistently feel the pressure of their parents’ ideal marriage, as well as sibling rivalry. Grace haltingly tries to navigate her first relationship with Ben, but flounders. David has a heart attack and falls from the gingko tree. A frightened Jonah witnesses it and runs away to Grace’s apartment.

David recovers, but fears his mortality. Jonah calls Wendy from Montana and she retrieves him. Liza has her baby and David, initially standoffish, agrees to watch her when Liza returns to work. Wendy and Violet mend old wounds stemming from Wendy’s losses, both of her husband and her stillborn daughter. Violet also makes amends with Jonah. Grace confesses her lie and returns home to live with Marilyn and David while she contemplates her next move.

As the work closes, David and Marilyn find contentment and comfort in one another as they marvel at the brood they have created, out of their extraordinary and enduring love.

More summaries and resources for teaching or studying The Most Fun We Ever Had.

The Most Fun We Ever Had from BookRags. (c)2022 BookRags, Inc. All rights reserved.