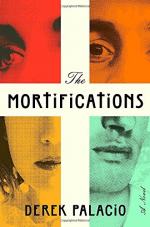 The Mortifications Summary & Study Guide includes comprehensive information and analysis to help you understand the book. This study guide contains the following sections:

This detailed literature summary also contains Quotes and a Free Quiz on The Mortifications by Derek Palacio.

The following version of this book was used to create this study guide: Palacio, Derek. The Mortifications. Tim Duggan Books, 2016.

Communism teeters over Cuba and Soledad Encarnación’s family in 1980. Before it falls, bringing her country and family down with it, Soledad packs up her young twin children, Ulises and Isabel, and heads for the States. Her husband, Uxbal, however, stays behind, steadfast in his faith in the rebellion.

Once in their new home of Hartford, Connecticut, Soledad secures a job and enrolls her children in school, where over the next five years Ulises prospers in academics and Isabel thrives in her faith. Driven by a promise of celibacy she made to her father as a child, Isabel declares her intention to uphold that promise and join the convent. Soledad starts dating a Dutch tobacco farmer, Henri Willems, for whom Ulises starts working.

While Isabel is skating on a nearby lake one day, a boy breaks through the surface, and Isabel's experience with his death convinces her she must guide the dying to God. She volunteers nearly a thousand hours at the local hospital, earning an award for her service. At the award ceremony, Isabel makes a statement that the audience interprets as an admittance of assisted suicide under the Church’s watch. Her family and one of the nuns rush her to the convent for refuge, where Isabel decides to stay and, later, take a vow of silence as a novitiate.

Ulises continues excelling in his studies, now in college, as well as on the plantation, until he injures himself at work and must recover at home, where he starts writing about tobacco for trade magazines. Isabel departs from her family to serve God in Guatemala.

Months later, a letter from Uxbal, in response to one of Ulises’s articles, arrives at the house. It remains on the kitchen table for months longer, haunting the household. When Isabel visits her family, she reads the letter; after she leaves them to return to Guatemala, the letter goes missing. Then, so does Isabel. Soledad, sick with worry and then with breast cancer, begs Ulises to travel to Cuba to find her.

Meanwhile, Isabel has already found the destitute rebel camp in Buey Arriba, where her father’s health has been rapidly deteriorating. As she attempts to revive Uxbal, she learns he and the others have lost their faith—in the rebellion and in God. In response to this news, she breaks her vow of chastity and sleeps with two of the rebels. While sleeping with the second rebel, she breaks her vow of silence to express the purpose of their intercourse: to impregnate her. Uxbal denounces her actions and Isabel admonishes him for losing faith and for his request of her celibacy when she was a young girl. In an attempt to restore some of the camp’s faith, she converts one of the huts into a chapel. Two rebel children, Adelina and Augusto, are drawn to her and she acts as a surrogate mother to them. The children then wield questions at Isabel about their identity and their family. Isabel despairs because she cannot tell them the identity of their mother. To avoid a similar situation for her own child, she sleeps with four more men in the camp so neither she nor anyone else could ever know the identity of her child’s father.

Ulises finally reaches Buey Arriba, where an old, near-blind woman, Delphín, occupies the Encarnacions’ old house. Delphín, the sister of Uxbal's mother, mistakes the son for his father and Ulises briefly rests there before reuniting with his sister at the camp. They both learn of their parents’ respective illnesses; Ulises also discovers that his sister is pregnant and plans to abandon the camp and her family as soon as Uxbal dies.

Soledad, unable to cope with her family’s absence and her cancer, treks to Cuba with Willems, against her doctor’s recommendation. Isabel will not initially agree to visit her mother, but Uxbal and Ulises rush to her. Now both bed-ridden, Uxbal and Soledad catch up and Ulises speaks with his mother until Isabel comes down from the hill, gracing her mother with her presence once more before she dies. A large and long funeral procession ensues, later attracting communist soldiers to the house in search of Uxbal. Ulises poses as his father, so the soldiers arrest him instead.

After about five years working the camps and then serving time in jail, the Soviet Union collapses and Ulises walks free, but the government charges him with improving Cuba’s economy: he agrees to farm tomatoes in Buey Arriba. When he first returns to the house, Delphín is raising the rebel children Adelina and Augusta. She dies immediately, and he takes de facto custody of the siblings.

Months later, a group of nuns passes through the village; one of them is his sister, who asks Ulises to promise he will not seek out her daughter, born right before Isabel said goodbye to her mother one last time. He acquiesces. She leaves with the nuns, but not from Ulises’s mind, triggering a chain reaction of questions from the children. He gives in to their curiosity, telling them the story of his life and his return home to Cuba.

The Mortifications from BookRags. (c)2022 BookRags, Inc. All rights reserved.