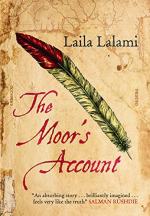 Laila Lalami
This Study Guide consists of approximately 53 pages of chapter summaries, quotes, character analysis, themes, and more - everything you need to sharpen your knowledge of The Moor's Account.

Dorantes’s wife gives birth, but the child ends up being sent away to a Christian convent. Both Dorantes and Castillo end up taking on new Spanish wives. The viceroy tries to convince Dorantes to go on another expedition because of his experience, but Dorantes refuses. After what happened last time, he doesn’t want to go again. The viceroy tries to purchase Mustafa, but again Dorantes refuses. Castillo confesses to Mustafa that he’s tried to ask why Dorantes won’t sign the papers to grant his freedom, but Dorantes never tells him. Mustafa convinces Dorantes to let him go on the expedition so he can return with wealth for Dorantes. Dorantes agrees, his greed getting the better of him.

Dorantes has embraced the Castilian lifestyle once again. The theme of Prejudice is illustrated in this chapter when he dismisses his child...

More summaries and resources for teaching or studying The Moor's Account.