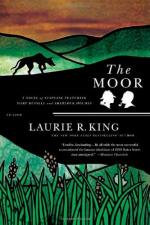 Laurie R. King
This Study Guide consists of approximately 31 pages of chapter summaries, quotes, character analysis, themes, and more - everything you need to sharpen your knowledge of The Moor.

This detailed literature summary also contains Topics for Discussion on The Moor: A Mary Russell Novel by Laurie R. King.

Mary Russell is called by her husband - the famous sleuth Sherlock Holmes - to travel to the moor to help solve a mystery at the request of her husband's godfather. When she arrives, she has several items he's requested and is ready to help search for clues. Holmes is investigating the sighting of a ghostly carriage and a ghostly dog, similar to the Hounds of Baskerville. The sightings are sporadic but are serious enough to frighten people. Holmes and Russell spend several days and nights on the moor in search of clues. They hear stories from various sources, but most are fueled by rumor rather than first-hand sightings.

During one of their trips onto the moor, Holmes discovers a small bottle of dirt that is later analyzed. There's pure gold in the dirt, though it takes Holmes some time to realize what that clue means. This is only one of many clues they discover. During a dinner with a man named Ketteridge, who is owner of Baskerville Hall, home of the famous "Baskerville Hound" story, Holmes notes that Ketteridge's secretary resembles the original owners of the Baskerville Hall. That secretary, David Scheiman, seems to have a role in the mystery, though it takes Holmes and Russell some time to figure it out.

At one point, Russell goes onto the moor alone, and it's during that trip that she is told that Elizabeth Chase wants to see her "about a hedgehog". Russell isn't certain there's a point to the hedgehog, but goes to hear the woman out. She learns that a young boy saw the hound, though the boy was so traumatized that the story of the sighting has been kept very quiet. From the story, she learns that the hound ate the boy's snack. Elizabeth then says that the hedgehog was struck by something solid - probably a carriage wheel - and had been bitten, apparently by a dog. Elizabeth's stories indicate that the carriage and dog are real, not apparitions.

As Holmes and Russell continue to follow the clues, they find that Ketteridge and Scheiman are con artists. They have teamed up to "salt" the land around the moor with gold. They use the ghostly carriage and hound to scare people away from the operation and expect that land values will skyrocket once the word gets out that gold has been discovered. Homes and Russell catch the men in the act, but Holmes is captured. Russell, calling on her reserves of courage and ingenuity, helps her husband escape. The plot foiled, Holmes and Russell return to spend a final bit of time with their host.

More summaries and resources for teaching or studying The Moor: A Mary Russell Novel.