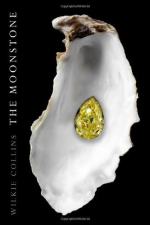 Wilkie Collins
This Study Guide consists of approximately 32 pages of chapter summaries, quotes, character analysis, themes, and more - everything you need to sharpen your knowledge of The Moonstone.

The Moonstone Summary & Study Guide includes comprehensive information and analysis to help you understand the book. This study guide contains the following sections:

This detailed literature summary also contains Topics for Discussion and a Free Quiz on The Moonstone by Wilkie Collins.

The Moonstone, by Wilke Collins, is an exciting nineteenth century English detective story. The object of everyone's attention is the Moonstone, a beautiful and flawed diamond that was stolen from the statue of a moon good from a shrine in a remote area of India. The theft occurred by a Mohammedan emperor in the eleventh century. The stone eventually was taken by John Herncastle during the storming of Seringapatam in 1799. When he died, he bequeathed the Diamond to his niece, Rachel Verinder.

There is a legend surrounding the beautiful Diamond. From the beginning, the Diamond was followed and watched by three Brahims, who disguised themselves. They followed the Diamond wherever it went, hoping to seize it and return it to the shrine. Disaster was supposed to befall those who stole the Diamond. Some people believed in the myth; other did not.

After John Herncastle returned to England, his life was miserable. He was basically a social outcast who lived in fear of being killed because of the Diamond. The Diamond was kept in a London vault with instructions from Herncastle. If he succumbed to a violent death, the Diamond was to be taken to Amsterdam and cut into six stones which were to be sold. If he died of natural causes, the Diamond was to go to his niece, Rachel Verinder. Herncastle died of natural causes and the Diamond was delivered to Rachel on her eighteenth birthday by Franklin Blake. Rachel knows nothing of the legend of the Moonstone, but those around her do. The Moonstone affects them all in some way and the book consists of the different characters telling their part of the story of what happened during that year. The Indians also make their presence known in London and make it clear that they are also there and waiting. Rachel excitedly wears the Diamond at her birthday party, where it is seen by the three Indians who are posing as jugglers. The next morning, the Moonstone is missing and the suspense begins.

The unique structure of this detective novel adds to the suspense. The novel consists of the piece work of the different narratives of different characters, each adding what they know to the events surrounding the missing Moonstone. The suspense holds threader's interest throughout the book as the reader finds himself/herself forming theories throughout the book and then waiting to see if they prove out. This well-written book is worth the reader's time. The reader will find the book hard to put down and will be happy to have read the book.

More summaries and resources for teaching or studying The Moonstone.

The Moonstone from BookRags. (c)2022 BookRags, Inc. All rights reserved.